Sonic Hockey Club El Paso, Texas
Specialized Equipment
Sonic Hockey Equipment
We note that the blind athletic community is a fairly small percentage of the disabled community as a whole. There are very few manufacturers of disabled sports equipment, even fewer make equipment for blind athletes, even fewer than that, if any, for blind hockey play. As a blind hockey player or program administrator, you will need to be knowledgeable, thoughtfully analytical, and creative to develop equipment that your players can use to play the game effectively. All the Mooses' equipment is essentially constructed from parts that have been manufactured for uses other than for blind hockey. 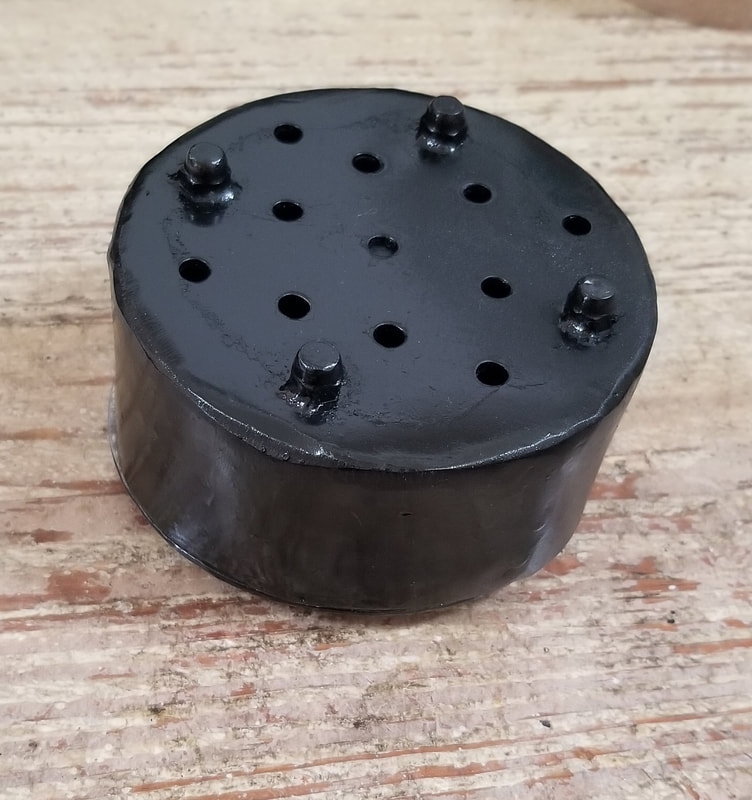 Obviously, the most important piece of hockey equipment that the blind player needs to play effectively is the sounding hockey puck. We have invented and developed more than sixty configurations of hockey pucks that make a sound, so the blind player can locate and acquire the puck by hearing it, rather than seeing it.

The present unit is a 108db, siren sounding device, powered by a 9-volt battery, housed inside a 14-gauge, stainless steel casing, named "Babs." Babs is 3.375" in diameter, 1.125" in height, enabled by the newer model sounding device, which is only 5/8" tall. Babs, with sound assembly installed, weighs only 12 ounces.

Check out The Sonic Hockey Puck and Making a Sonic Hockey Puck sections for specific information on Babs, and how she fits into our program.
Sounding Goal Beepers
​We use electronic, oscillating beepers placed on the top of each goal, so the players can directionally locate the goal, slot, and orient themselves to the offensive and defensive zones. 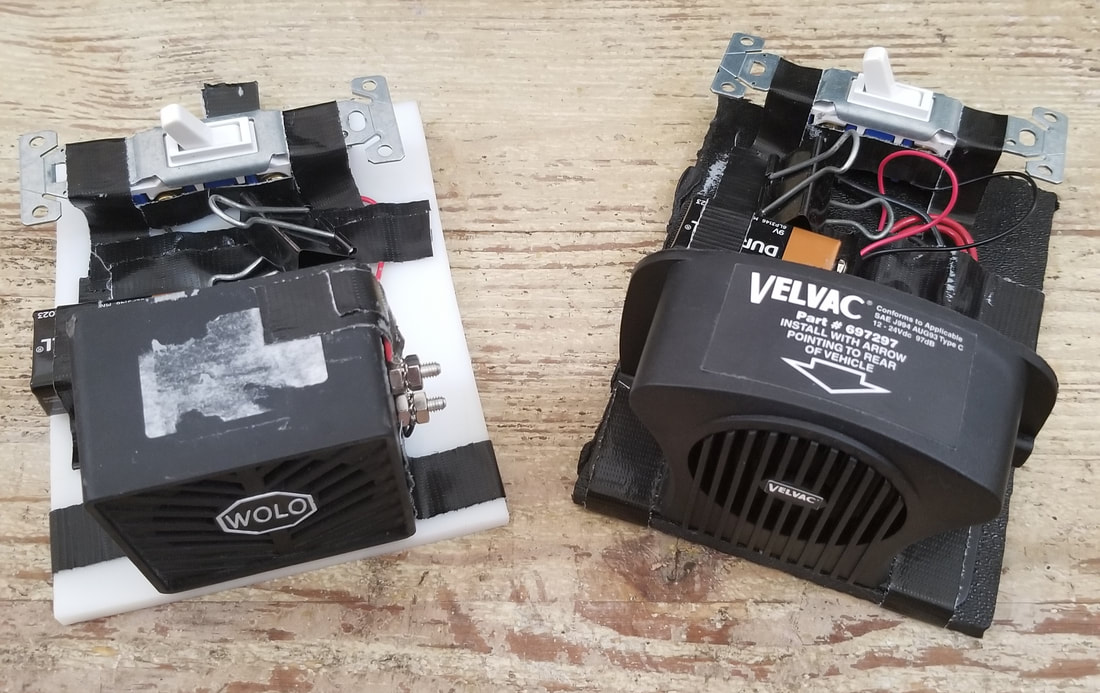 On the left is the sounding device used to designate the white goal, on the right is the black goal sounding device. These are two models of industrial vehicle back up alarms, each powered by a nine volt battery. The batteries last about two hours before they need to be replaced.
Tactile Blue Lines
Flat Blade Stick 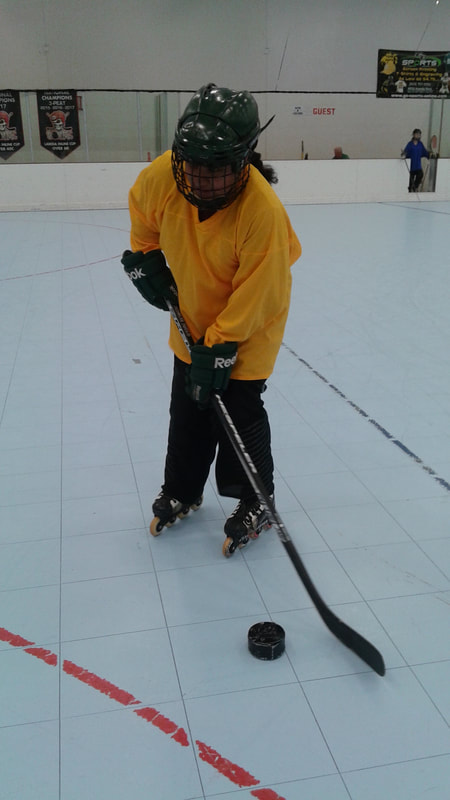 ​Most of our players use a flat bladed stick. An ABS blade can be heated and pressed flat to eliminate any curve in the blade. We find that the extra 5% power generated by a curved blade is negligible in the blind game. The additional touch and control of a flat blade on the puck does help the blind player, especially on the backhand plays. 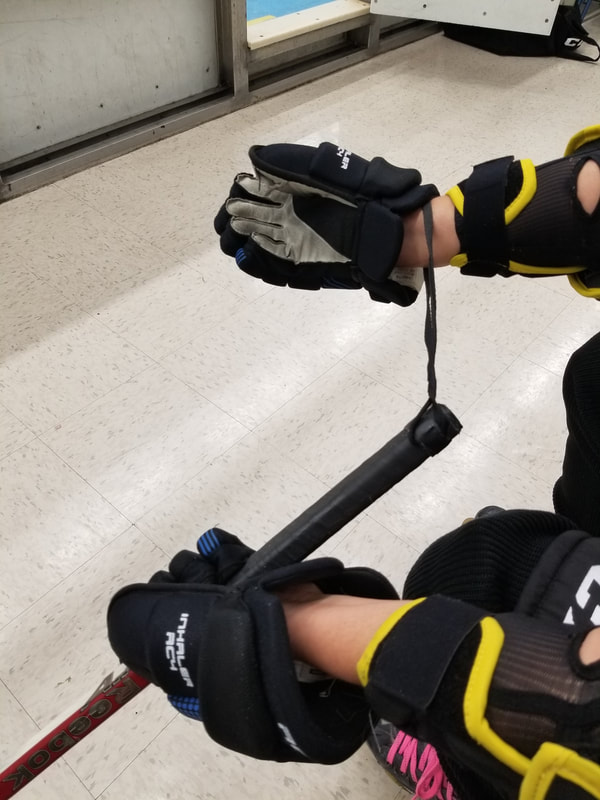 Most of our players also use a tether attached to their stick end, which they loop around their top-hand wrist. On the occasion the stick is knocked from the player's grip, the stick remains held to the wrist, rather than get knocked ten feet away, making it un-findable. When you're blind, if you drop your stick, you have lost it for the duration. The tether prevents this unfortunate occurrence. 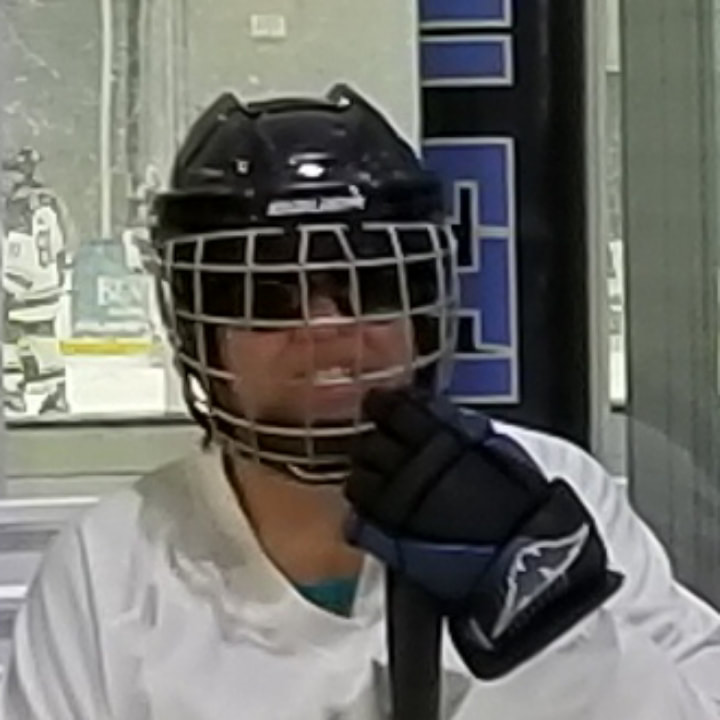 ​Each player uses a set of opaque swim goggles to completely obscure any light perception. This eliminates any concern that one player can see better than another, and determines our "totally level playing field," which is the hallmark of Sonic Hockey!

For the (hopefully near) Future!
We are looking into a set of light sensor technology. When placed in the goggle lenses, this sensor set would telemetrically report to the score table if any light were entering into a player's goggles, light which would enable him to see at whatever level. We note that even at the Olympic level, many para-athletes are accused of "cheating," using some residual vision by positioning their blindfolds less than functionally perfect. Both the 5-a-side Soccer, and the Goalball rulebooks determine that an athlete can be eye patched if cheating is suspected. We note that even the best quality goggles can be mal-positioned so an athlete can use Templar, Nasal, or Inferior periphery vision areas.  Some of the "blindfolds," that we have seen even in the Olympics are frankly a joke when it comes to fully obscuring vision. A set of light sensors as described here would eliminate this concern. We're working on it.