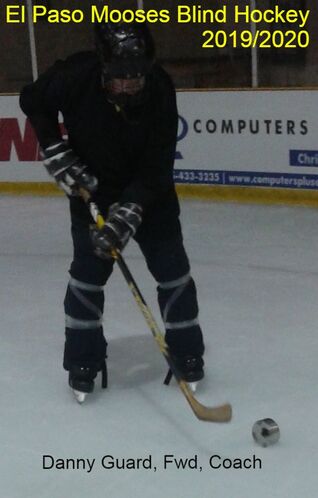 Danny made the first sounding hockey puck in 1987, started the Mooses in 2012. 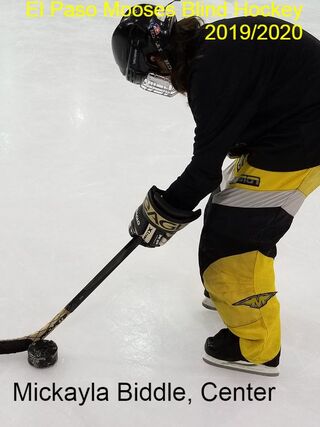 Mickayla Biddle
Kayla is the originating influence of the Sonic Mooses. In the Summer of 2012, She asked her dad to see if she could join the Blue Mooses Kids' Sports program to play hockey. Only problem was that she is blind. Coach Danny hesitated for maybe five seconds, and set about devising the game so she could play.

Mickayla was seven years old at the time, she is now 14, and is one of, if not the best, blind centers in all of the disabled hockey world! Her ear on the puck is her best asset, she has developed her directional, depth, and selective hearing abilities to the highest level. She has aspirations to play with the USA Olympic team for the 2026 Olympics!

Mickayla was born in 2004, She plays left-handed. 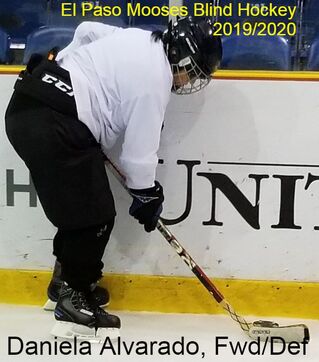 Daniela Alvarado
Daniela is our newest Moose, she has been playing for nine months. Mobility on her skates is no longer a rookie issue, her hockey sense, playmaking skill, and learning curve are all first rate. She has played  on both wheels and ice blades, and is getting better and better.

She plays primarily right handed (sometimes left - which you can do with a straight-blade stick). She is forty years old, and plays with the enthusiasm of a twenty year old.

Daniella works on her skating 3-4 times each week, almost every practice and game session! 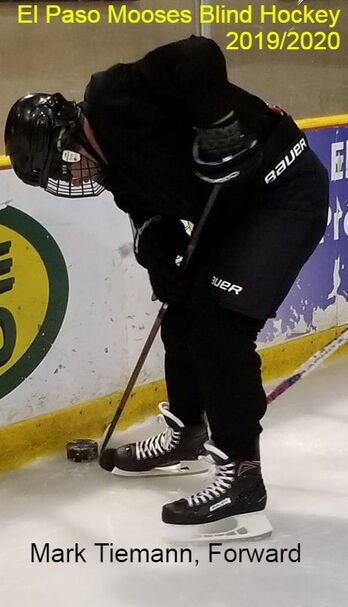 Mark Tiemann
​has been playing hockey for nine months. While his vision is very poor, essentially a B-1, his directional and depth hearing is excellent. His ability to pinpoint loose pucks is excellent. His vision loss in largely neurological, due to head trauma,  from a fall from height.

Sgt. Mark plays right handed, we're trying to get him to stop switching hands, although with his straight-blade stick it works on occasion. He has displayed a high end learning curve, and wants to compete in the Olympics maybe in Biathlon.

Sgt. Mark is in his 50's, he is currently working on his two-way, full rink play, and tactical offensive playmaking with his teammates. 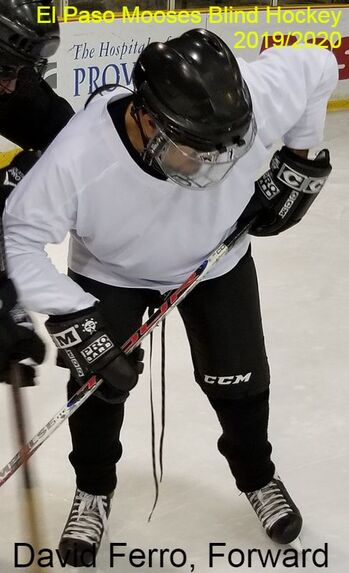 David Fierro,
​David collects the puck in the neutral zone and sends it to his teammate in our 3v3, cross ice game scrimmage.

David is one of the Mooses' veteran players, in his sixth year now, and one of our better, more mobile skaters. He has worked diligently on his communication skills and the result is his mobility around the  playing surface is excellent.


David was our very first right handed player, and for a while, the only one. He also plays with a straight-blade stick and his backhand play is improving all the time. He is experimenting with lifting the puck on his shots at the goal.

David is 40-something years old and is using his hockey play to both give up smoking (for going on two years now!) and reduce the effects of his diabetes. He is doing well on both counts. 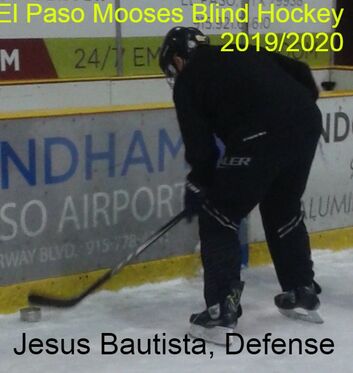 Jesus has been playing over three years with the Mooses. He started out like all our players, never having been on skates, and has diligently worked on every aspect of his game. Coach is instrumental in the development of our hockey player communication system, always coming up with new ideas for how players work with each other.

Coach plays strictly left handed, and has worked on his backhand passing more than his forehand. 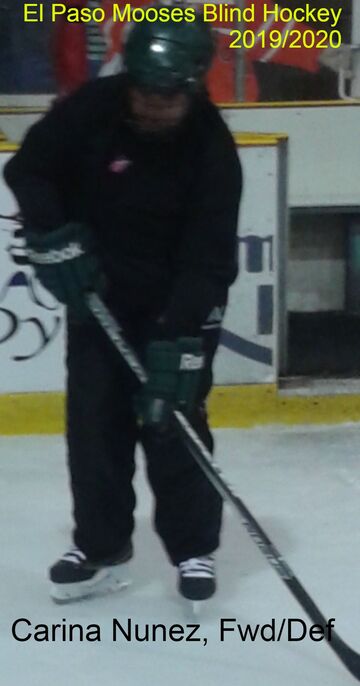 Carina  Nunez
Carina is one of our younger players, having turned twenty-two earlier this year. She is a student at New Mexico State University, studying to be a teacher of students with disabilities. Carina has been playing with the Mooses since she was 15, one of the original players at the "Mooseville" facility, a private, half-court hockey rink on El Paso's Westside.

Carina plays left-handed, uses a flat-blade stick, and prides herself on being able to play both defense and offense. She is extremely accurate with her passing and shooting, although is chided by her teammates to exert more muscle into her shots.

Carina is working on her striding on skates, and hopes to improve her speed in the near future.

Craig Sanders
​Craig is one of our newest players, having played for about nine months. Craig is a rarity: a fully-sighted player who put on the goggles from Day 1, and learned to skate, as well as play hockey, all while blind.

Craig is also a perfect example of the learning curve that all blind players seem to have. He can skate, communicate, work with his stick, and perform in all parts of the floor, even though he is still doing all these things at the beginner level. He actively contributes to his team's success at every practice and game session, highlighting that hockey is truly for everybody! 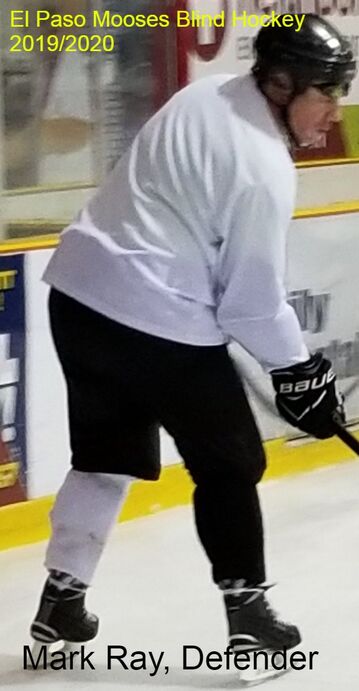 Mark Ray
Here is Mark Ray, protecting the slot, highlighting that he is our top defender, and he is also one of our best passers. Mark is a sighted player, and it was his shaft-on-the-floor pass blocking technique, witnessed by another sighted player, that gave birth to our major method of receiving an offensive pass.

Mark is 38 years old, and the father of Mickayla. He got the Mooses started playing blind hockey back in 2012, when he asked Coach Danny if Mickayla could learn to play the game. Mark has been a charter member of the program, playing for the more than seven years that the Mooses have been in existence.

Mark can play any position in the game, including Goalkeeper. He is the rare player who, although sighted, can put on the blind goggles and play with a high degree of confidence while blind. He has helped with our puck development, our tactile blue line construction, our communication system, and about every other aspect of Mooses Sonic Hockey. 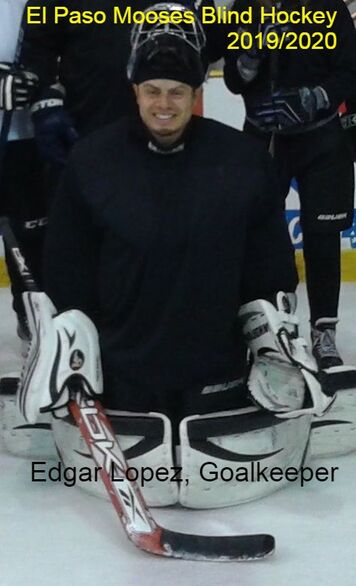 Edgar Lopez
Edgar is a sighted goalkeeper, who has been playing on ice with the Mooses for all three of our ice seasons, as well as occasional inline sessons. He is the rare player who has no hesitation about going into the dark, and playing blind. At our ice training sessions, Edgar is constantly experimenting with his stance, positioning and hearing.

​Edgar is good assistant coach as well, able to offer cogent advice to our skaters as to how to improve their offensive game (against himself).

Edgar plays right handed, although left as a keeper. He has been playing hockey since 1995, at age 12.
Here is an ice image of Vianca Ortega skating with the El Paso Rhinos girls' 16's team. Vianca is a sighted player that learned to play blind at Mooseville in 2012 and has participated with us ever since. The 2019/2020 season is her 13 year old year, she is an '06.

Vianca can play any position on the rink, ice or inline, including goalkeeper. She is working on her directional and positional hearing while playing blind, and usually takes up a defensive position, while adding offensive playmaking to the mix.

Her main strength is her playmaking ability, and her willingness to work with her teammates. She is one of those players that makes others better when she plays. 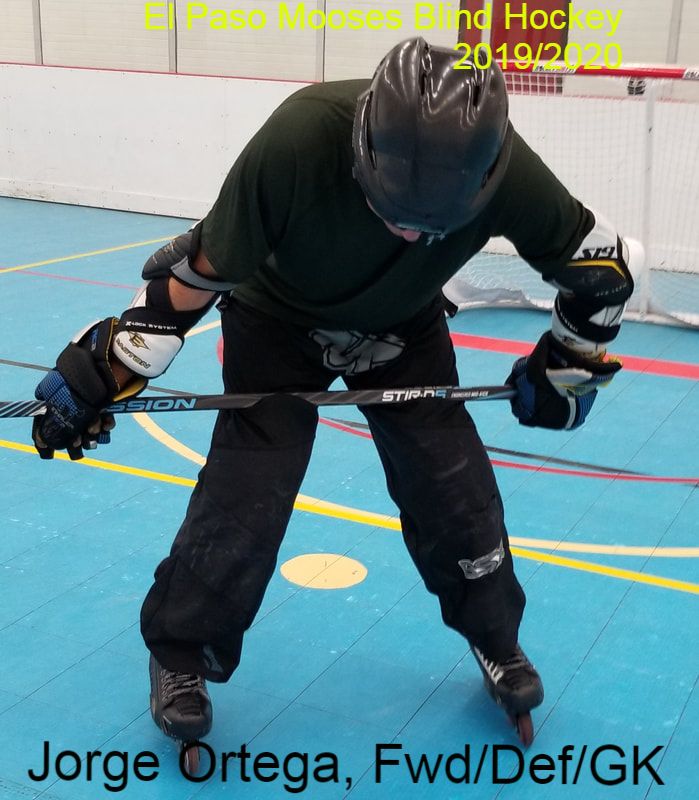 We'll get an ice shot of Jorge Ortega in action during our next ice session at the Coliseum. Until then, here is Jorge, aurally scanning the horizon from the defensive slot. Jorge has been involved with the Mooses from Day One. He has helped all our payers to play better, he is a USA Hockey certified youth coach, learning himself to play the game at Nations-Tobin back in 2003. He plays both ice and inline, and can play every position on the floor or on the ice.

Jorge is sighted, and has also helped with our puck development and the process we evolved to pebble the blue lines.