How to make a sonic hockey puck

It really is true, over the past eight years and even before, we have made more than 60 models of continuously sounding hockey pucks. Here's how the Mooses construct the hockey puck we presently use.

We understood from the outset of our program that if blind people were playing hockey, they would need to hear the puck, as they could not see it. For us, a "continuously sounding hockey puck," has always been a necessity. In October of 1987, Coach Danny cut two holes in a rubber, regulation ice hockey puck, and inserted the buzzer used in a beep baseball together with a 9-volt battery. It worked just fine for inline play, but we never tried it out on ice til 2015. The buzzer was not moisture resistant and is not suitable for ice play. We went on from there.

We continue to modify, improve, and try out new components of the puck. Our present model is perhaps not the ultimate. Note that we are not buying something ready made by some manufacturer. We construct the puck from readily available components, each of which is produced by some company for use other than in a blind hockey puck. The exception is the outer puck casing itself, which we have fabricated to specification by a localEl Paso company, Dominguez Sheet Metal. You can also use two 4" ABS drain pipe covers, cut to size, as a lighter, plastic puck casing (see below).

We note that this sonic hockey puck requires hands-on maintenance to use effectively. You must assemble the components as shown below. You must change the battery every 60-90 minutes of use. You must know optimum battery storage practices. The puck gets slammed and banged around in normal play. Battery connections break, wires break. You must have some minimal knowledge of electrical wiring. Splicing and soldering knowledge helps. Whenever a sound assembly "goes dead," you must take it apart and see what has disconnected. We use Gorilla Tape (tm) a lot. We have refused to install an on-off switch to the system, preferring to splice/connect the lead wires by hand prior to and disconnect the leads subsequent to each use. So, you need at least one member of your hockey club able and willing to maintain the sonic hockey puck and sounding assembly in order to use this puck effectively. This does require attention and effort. 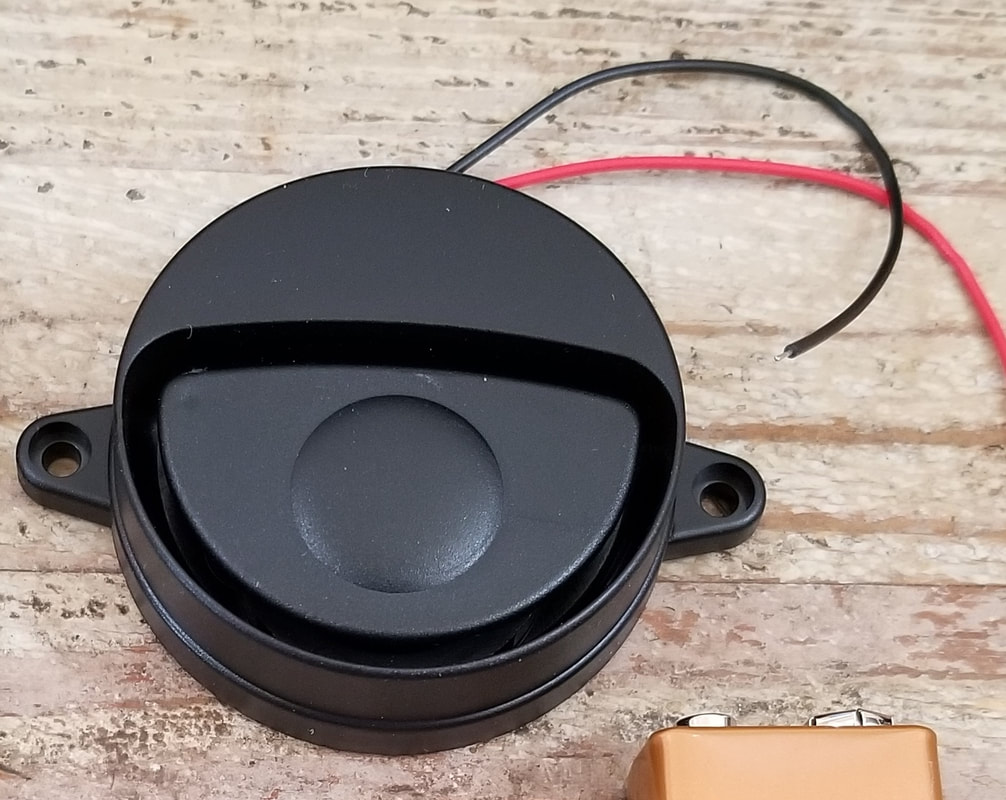 New sounding device. Siren from Radio Shack, bought on line, Radio Shack part number 2730057. Smaller, lighter, and just as powerful, if not more so, than ever before. 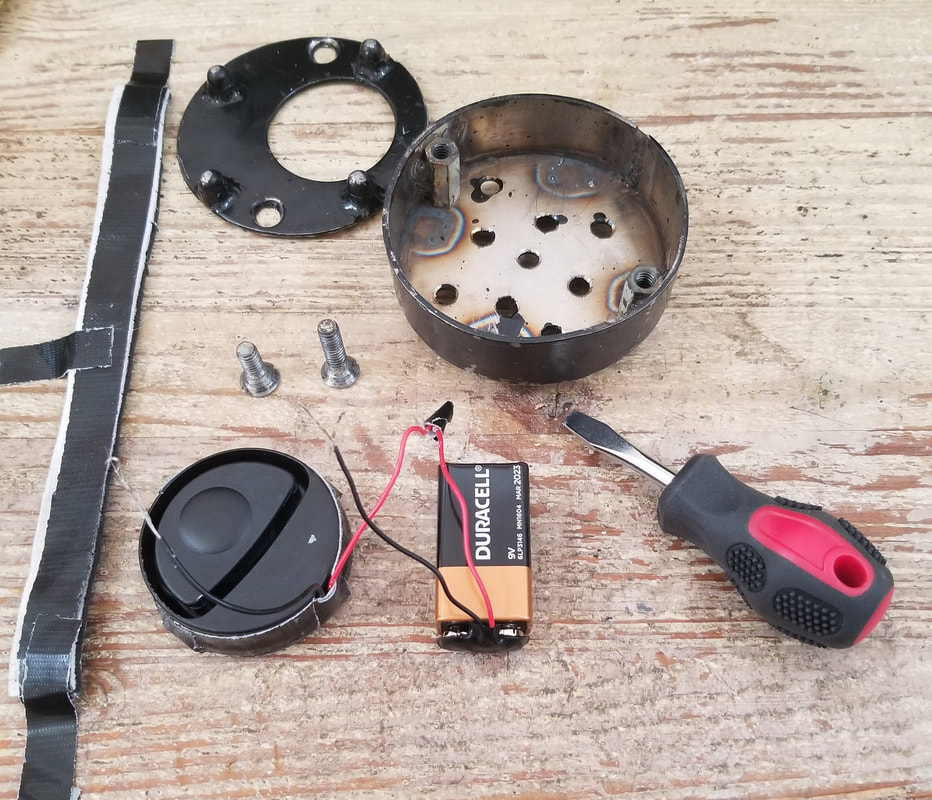 ​Yeah, it is now that simple! 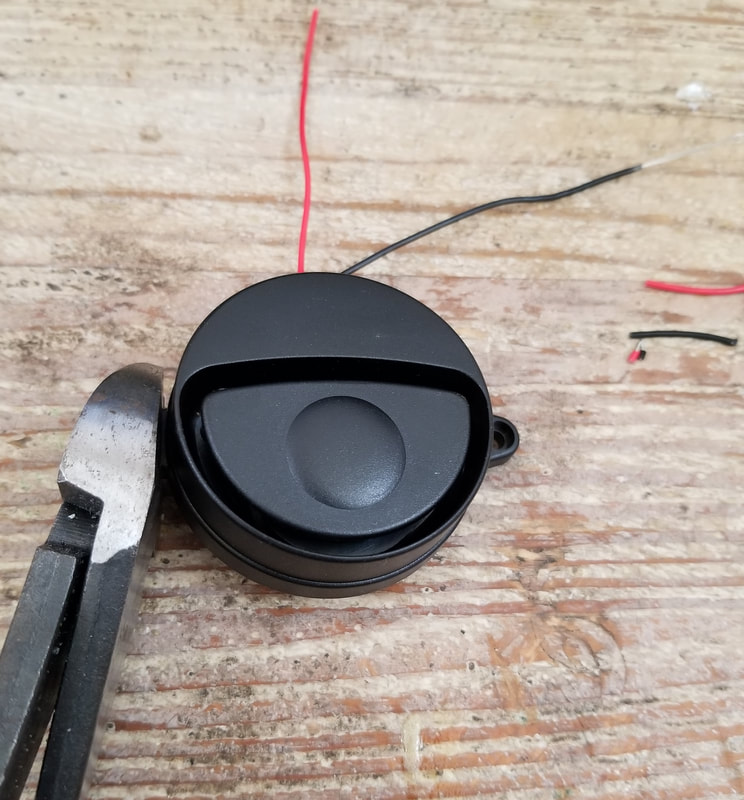 Step one:
1. trim the leads, about one half to three quarters of an inch of bare wire.
​2. cut the shoulder mounts off the sides of the device casing. 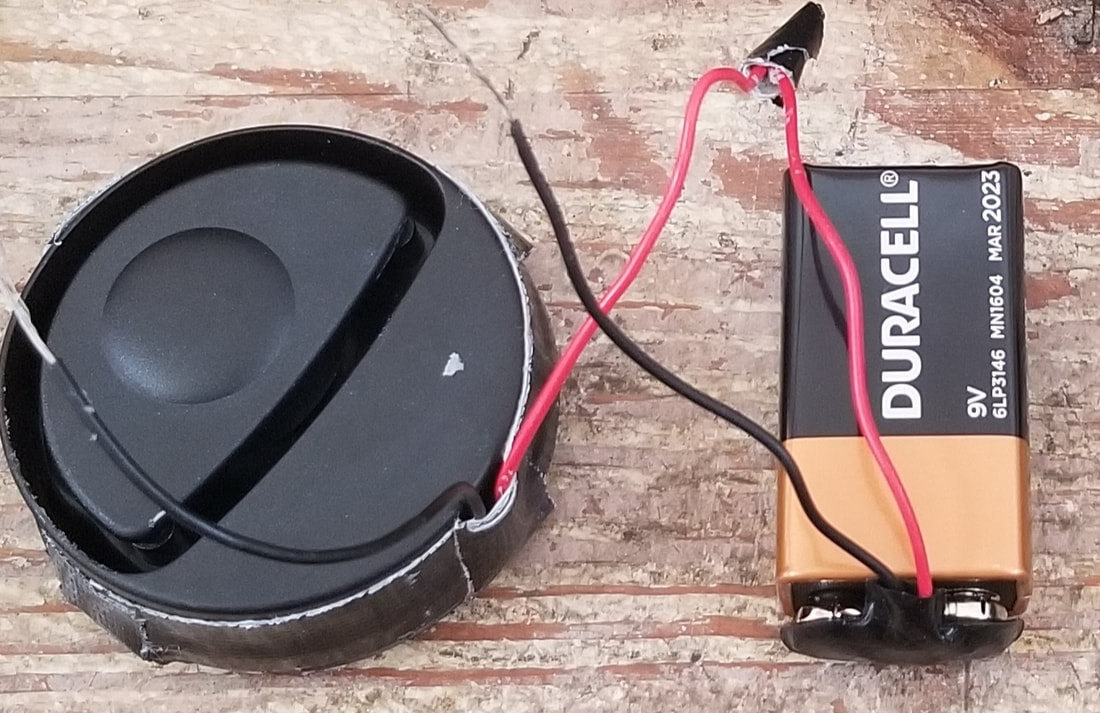 ​2. pigtail splice (simply twist together) the two red wire leads from the battery snap and the device. ​​

Step three:
tape the battery snap firmly onto the battery. The snap will come loose in the normal battering of play if this isn't done. 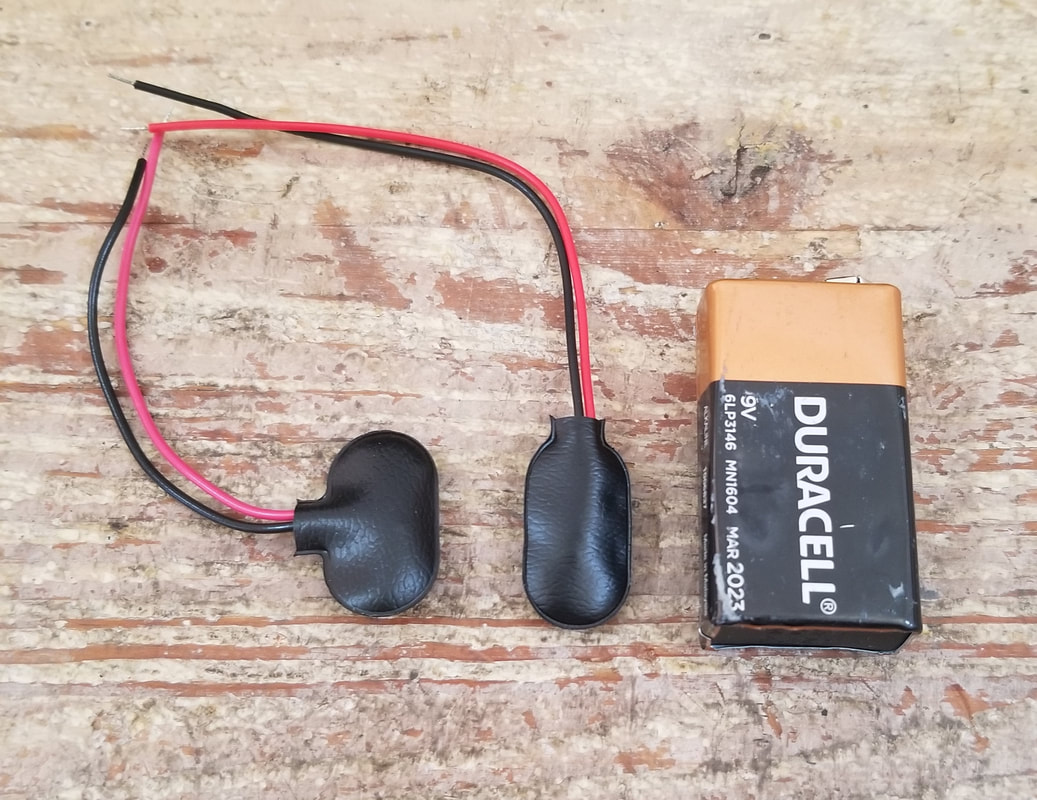 Note :
We now use a center lead battery snap (left), instead of an end lead snap (right). The end leads would get crushed by the outer casing during play and cause a battery short. 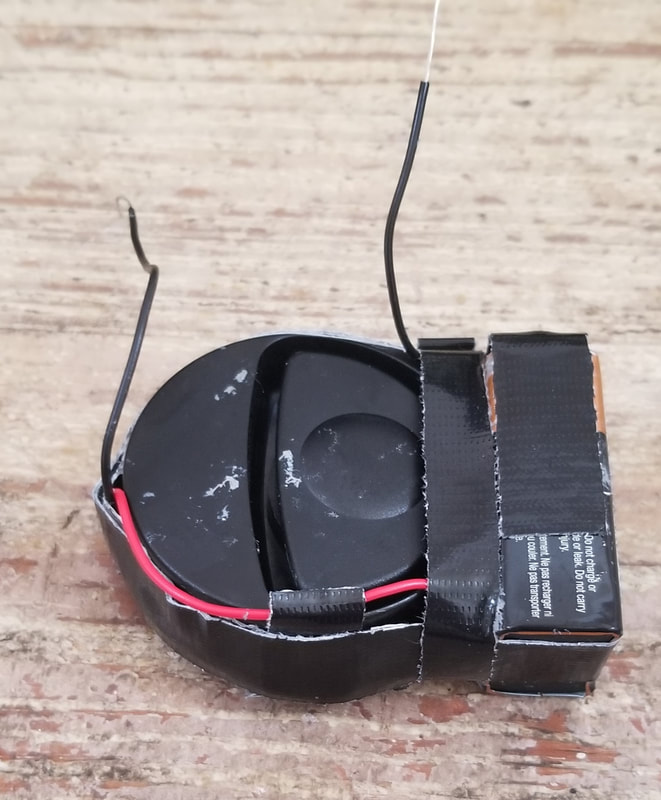 Step four:
Fasten the battery to the device. By the way, in all this taping, we really do exclusively use Gorilla Tape (tm).

This extra taping ensures that all the pieces of the assembly will stick together and stay put, so to speak. 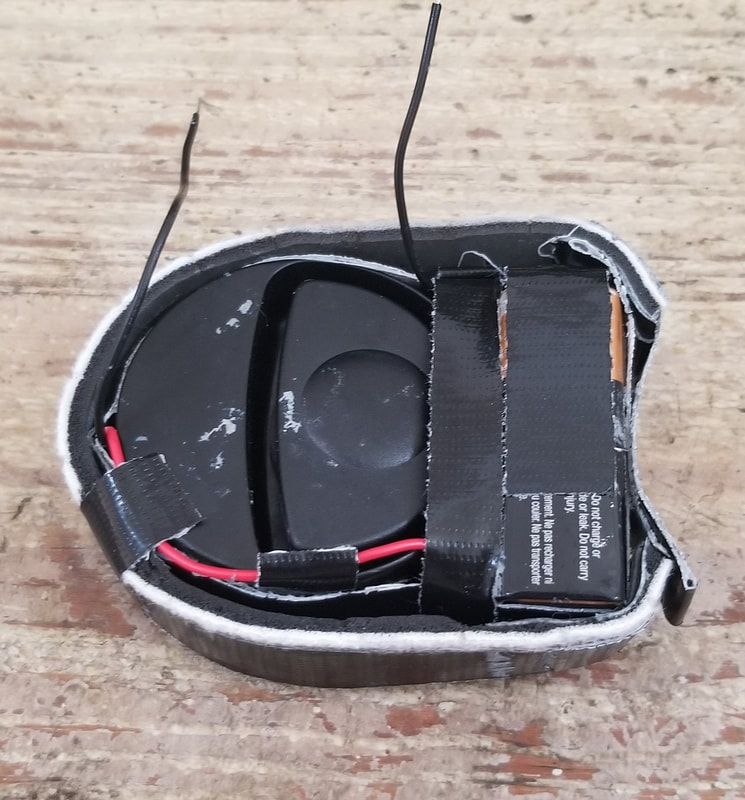 We are currently experimenting with various foam products to cushion the assembly. The foam from the Purple Pillow (tm) is our present model. 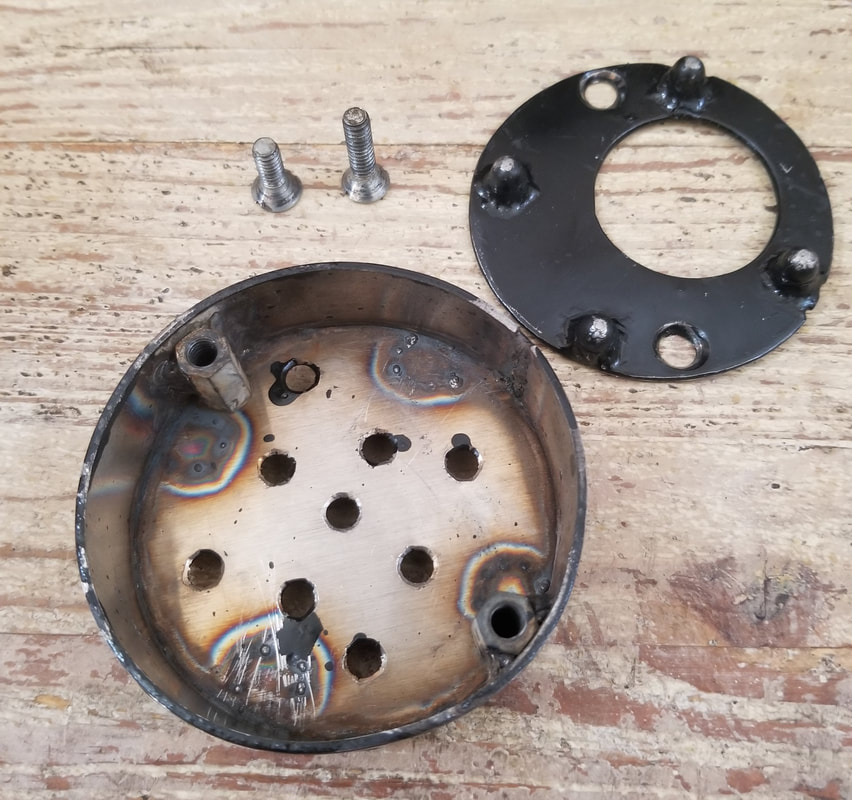 Note the outer hockey puck casing, 14 gauge stainless steel, the lid fastened to the casing by two bolts. The casing is fabricated for us locally in El Paso by by Dominguez Sheet Metal. 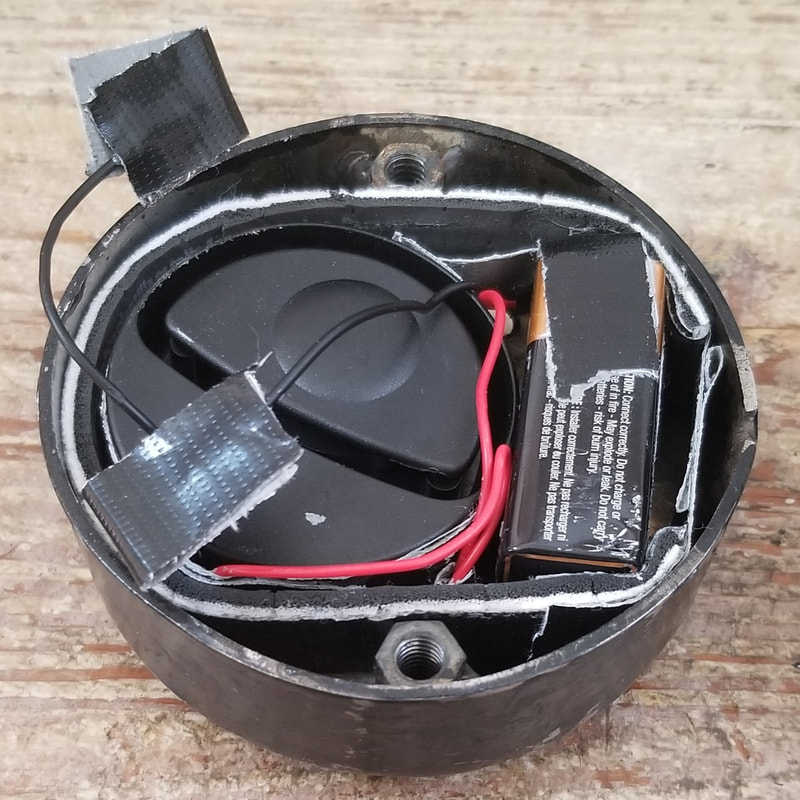 Step six:
Place the sounding device assembly inside Babs, ideally so that the black leads are accessible through the lid port. 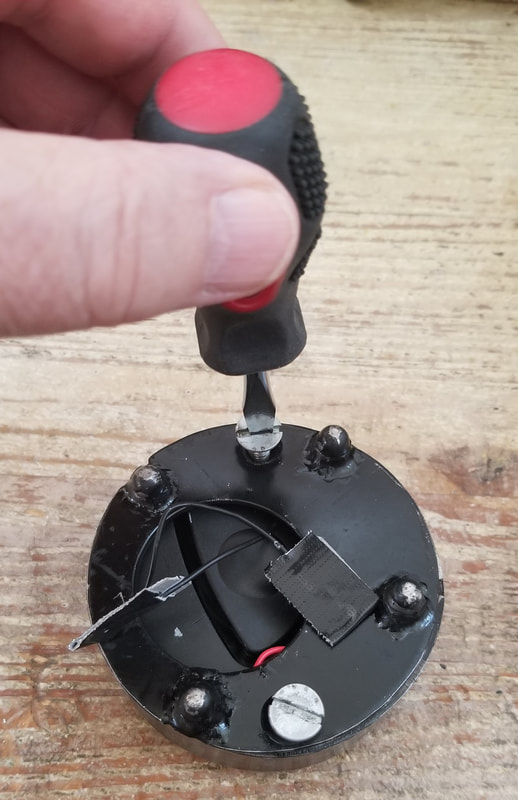 Step seven:
​Bolt on the lid. 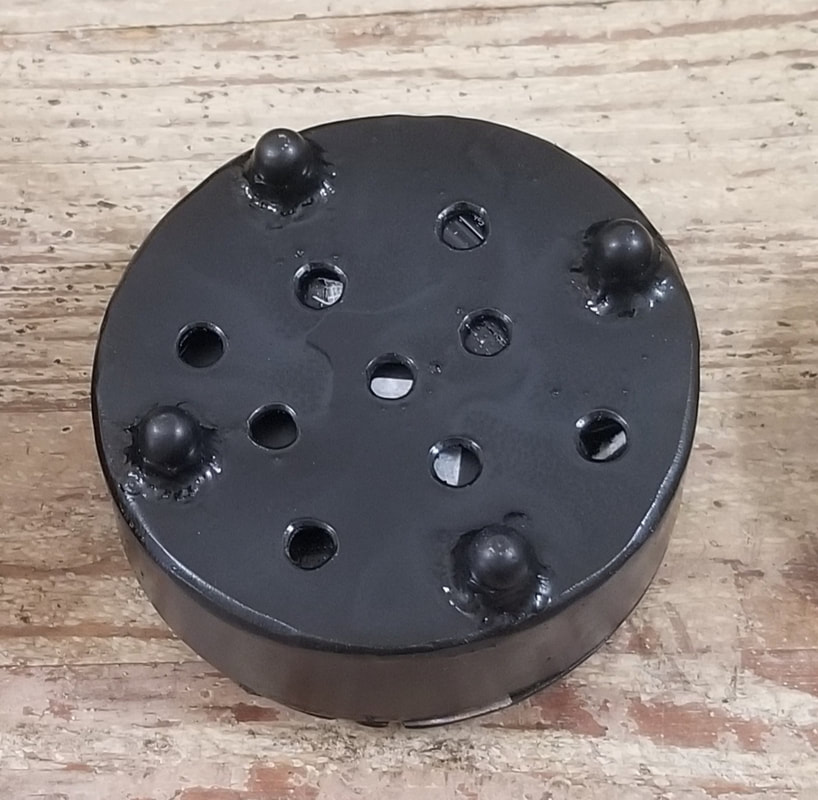 The finished Blind Hockey Puck
To activate, splice the two black leads manually, tape them to the device inside the casing, and slide Babs out onto the rink.
​Have fun! 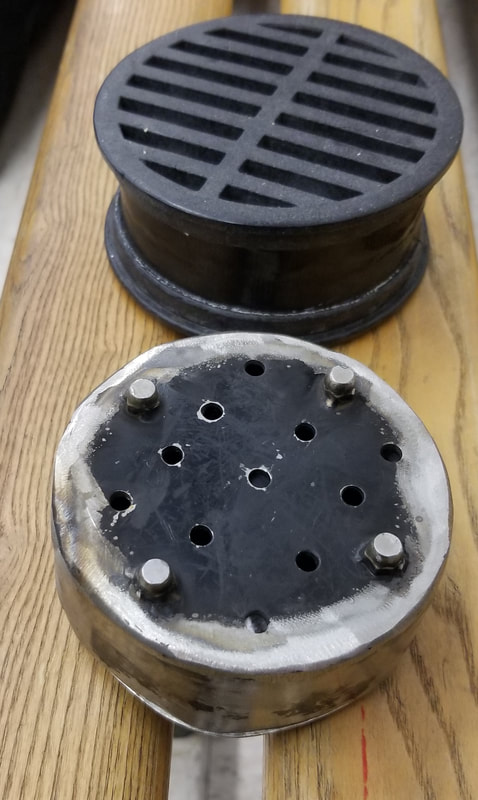 We note that, in unanimity, the Mooses players prefer the solidity and feel of the metal casing, which makes the puck dramatically easier to touch and control with the stick. The Sonic Hockey player finds that his/her ability in catching, stickhandling, passing, and shooting the puck all benefit from the extra firmness in the stainless steel material.

Both casing models will work on either an inline. The ABS casing will also work outdoors on a concrete or like surface.


October 1, 2019:
That's all there is to it. You buy the parts and assemble the puck. The Mooses do not own a patent on this construct, and we expect no one else to do so. The ability for anyone to produce this piece of equipment is, and must remain, in the public domain.

Further, we encourage and support all programs to experiment and improve on this concept. Please let all of us know when you come up with something better.