What is Blind Inline  Hockey?

Information, Philosophy and Debate about Hockey for Blind Players... 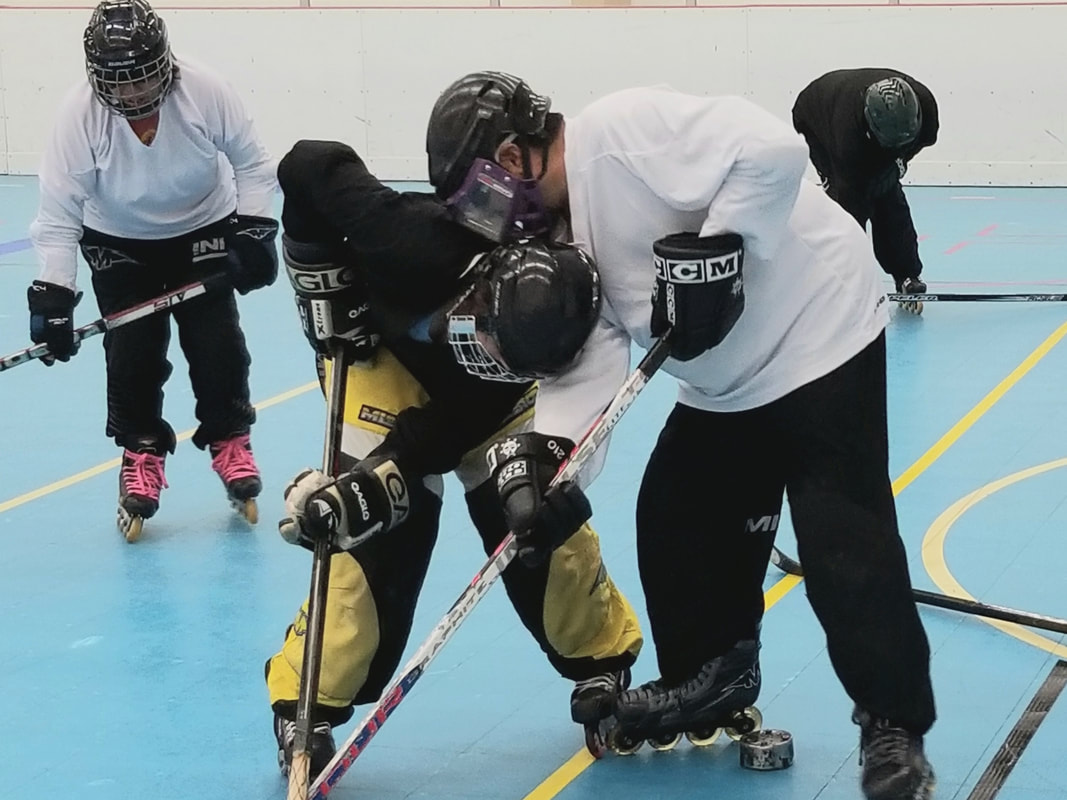 This is Blind Inline Hockey!
Mickayla and David are challenging each other one-on-one for the puck. Each player needs to use their strength and balance to move the other away from the puck and hold their own position. At the same time, they must listen intently to the puck to zero in on its position. They must each create a way to accomplish this task, while on skates, and do so blind.
The El Paso Mooses play the perfect game of hockey for blind players. But, the El Paso Mooses are not playing a game of hockey that is strictly for blind players only. The El Paso Mooses play hockey with blind players, visually impaired players, and sighted players all playing with equal skills and abilities. To determine a game where players with differing levels of vision can all play equally, all players must play with an equal amount of vision. Blind and visually impaired players cannot increase their vision to that of the sighted players. The sighted players, indeed all players, must match their sight level to that of the blind player. We all play with no use of vision, with vision eliminated; we all play blind!

We play hockey not by sight, but by sound! The game is regular hockey, but we all play blind, and use our hearing and touch instead of vision.
​What is the athletic definition of Blind?
A person is blind when they have little or no usable vision. The World Health Organization defines blindness as a LogMar rating of 1.3 or greater. This translates to a visual acuity on the Snellen scale (the "20/20" scale) of approximately 20/400 or worse. Most states in the U.S. define "Legal Blindness" as 20/200 or worse.

Every person's vision is different from anybody else's. These guidelines do not cover all conditions and situations of visual impairment. Every disabled athletic organization strives to provide opportunities for as many persons as possible.

The El Paso Mooses have devised and play the game of hockey where all the players are either B1's, or others playing with the use of their vision eliminated (wearing opaque goggles). All players play without the use of vision.

​ Blind Inline Hockey Objectives:
1. Develop our local program to include regularly scheduled practice and game play sessions. Increase the number of participant players. Develop a recreation league schedule of games.
2. Introduce our game in other cities to players, perhaps only two or three at a time.
3. Regional Blind Hockey play between local program teams on a scheduled basis.
4. National Blind Hockey participation in the Inline Cup, State Wars, and perhaps other tournament play.
5. International Blind Hockey up to and including World Championship and Paralympic championship play for all-blind Division participation.

The State of the El Paso Mooses​
The El Paso Mooses is a local-level hockey program in El Paso, Texas. This Mooses' program has been in operation since August 2012. Mooses' Blind Inline Hockey began when a blind youth player expressed a desire to play in a sighted program. This sighted program immediately designed a minimally adaptive form of hockey where all players used no vision to play the game. At present, the Mooses' club plays hockey 3 to 4 days a week. The program operates year-round. The program began with only that single blind player. Currently, players of all levels of vision engage in daily practice, developmental training, and weekly game play. Again, all players play with no use of vision. With exception of coaching individuals, all Mooses' players, both sighted and visually impaired, started with no prior experience, and learned to both skate and play hockey in this program.

​Mooses' Local Practice and Game Sessions:
We have the ability to practice every day. The Nations-Tobin Sports Center, operated by the El Paso, Texas,  Parks and Recreation Department, has made a commitment to scheduling an "open play" Blind Inline Hockey session daily. The Parks Department believes that its facilities should be open to the public to engage in non-competitive, free, recreation activities at each of the 25-plus facilities around the city. As the Nations-Tobin Sports Center houses two inline hockey rinks, the staff schedules open play times for Indoor Soccer, Inline Hockey, Volleyball, and Roller Derby. These schedules are variable and based on presented community need. The Department also believes that, even though the Mooses Blind Inline Hockey program has only 8-10 players, we deserve as much open play as any of the other sports with higher attendance.  We are grateful and acknowledge this generous stance by the Department toward disabled sports.

On some practice days we have only two players in attendance. We usually work on some skills, or even do our offensive pattern play work with just the two skaters. With three or four players in attendance we can set a defender vs the others to add some challenge to the play. Four or more players in attendance can play a variety of game-condition scrimmaging. We rarely keep score in any of this practicing, except to note that scoring did occur. Our objective is always to improve incrementally, and highlight skills that need focus work. With this training format we note that over any 60-90 day time period, each player does indeed show marked and noticeable improvement. Occasionally, we can see a quantum improvement at the group or team levels as well. Each player attends two to six of these sessions each week. Each player usually skates from 8-16 hours monthly.

In game play, we play three stop-time periods of ten minutes. Our ultimate game administrative format will have 4v4 skaters, plus goalkeepers, a referee and timekeeper/scorekeeper. We haven't yet had a game where every one of these personnel is present, but we can get along with a single goalie or no goalies, no timekeeping, and as few as 3v3 skaters as necessary. We can play on "the little floor" (82' x 56') on the regulation, "big floor" (185' x 85'), or crosswise on one end of the big floor (85' x 60').

Our Support of other Local Programs for Regional Play:
We invite anyone, anywhere to create a Blind Inline Hockey program, where all the players play with no use of vision. Call us! While this website is a pretty good "how to manual," we will be glad to discuss any point of development of this program. We can tell you more than 200 things that have worked, and we can tell you 200 things that have not worked.

​     If you are starting a Blind Inline Hockey Club from scratch, you will need to:
1. Have a source of player hockey equipment, that players can use til they get their own,
2. Sighted, or other person(s) who can act as guide(s) and coach(es). Notice, however, we do NOT assign each player an individual guide who essentially does everything for the player. Rather, we place all players in the play environment where the player learns, gathers information, figures things out, and takes action on their own. We typically have a single coach participate in any given session.
3. Continuously sounding hockey puck, call us about ours, or make one of your own. Our present model, with ABS casing, siren device, and battery connection costs about $35. The puck casing will last dozens of hours with minimal care. Our model with stainless steel casing costs about $300, and will last more than 500 hours with minimal care. A 9-volt battery will last for one hour, if stored properly prior to use. The battery connector/wires will last maybe 30-40 hours before being banged around too much.
4. Other blind inline hockey game and player equipment is necessary. Check out the Blind Inline Hockey Equipment section of this website.
5. Transportation: if a potential blind player has a support system of friends and family who can provide transportation to and from the rink, great. However, most do not have reliable transportation to attend practice and games. Organizing rides is necessary, and if done right, you have a team of dedicated, committed players.

Once you get a Blind Inline Hockey program started, more will come out to play!
They will not exactly "come out of the woodwork." You will need to vigorously and passionately recruit new players. You will find them one by one. They are out there, waiting to be introduced to our sport. There is no blind person who just wakes up one morning and says, "Hey, I might like to try playing hockey." Not every blind person wants to play hockey, or any sport, for that matter, but many are hesitant only because they have never had a sport presented to them in a way that they can actively participate, have success, and have fun doing it. We all know that hockey is just that sport, but it must be presented to a blind person before they know what it might become for them. Vigorously and passionately recruit new players!

The El Paso Mooses' offer to you:
​If you have at least two players wanting to play Blind Inline Hockey, either blind, or visually impaired/sighted who are willing to play without use of vision, our Mooses club will come to you. We will bring our equipment, set up our goal and puck sounding devices, and away we go. We will bring 2-4 players. We will practice a little while, show your players how we play, then designate two teams, put on the black and white sweaters, and play a couple of segments of offense/defense or game play. This will introduce your players to the game where blind players are just like everybody else, and can move creatively and tactically about the floor, pass, shoot and score! This is a lot of fun, and More Hockey for Everybody!

Our Support of other Local Programs for National Play:
We would like every blind hockey player to develop a Blind Inline Hockey team in his or her city. This will create more opportunities for blind players to really enjoy the great game of hockey. As we develop more Blind Inline Hockey teams, these programs throughout the country can meet together on a regional basis, playing game sets with each other. Regional, two to four team get-togethers can be developed. Then at the Inline Cup, held annually in Las Vegas, all the blind or visually impaired players might play with each other at the National level.
​
Our Support of the National Program for International Play:
The El Paso Mooses want to fully support USA Roller Sports organizing their national and international tournaments wherein all players within B1, B2, and B3 classifications of play can participate.This is not done at present. The El Paso Mooses call upon the U.S. and Canadian National Governing Organizations to enable all players to compete fairly, regardless of their vision level!

From these national events, representative National Teams are selected to compete internationally, and produces More Hockey For Everybody!

Coming up:
Over the next several months, the El Paso Mooses are going to travel to a half-dozen cities throughout the United States. At each city, we will set up our Blind Inline Hockey rink equipment, grab our sounding hockey puck, and skate out onto the floor. We will show the local blind players how we play hockey. At each city there may only be two or three players willing to learn to play with no use of vision. No matter how many, those players will learn how much fun it is to play hockey where anybody can play any position, and anybody can make saves, complete passes, skate with the puck, and score goals, where everybody plays with no use of vision!

​Over the next several months, the El Paso Mooses will reach players in each of those half-dozen cities, adding each player to the list that would like to play in a 2022 USA Inline Cup...and maybe play on a Team USA Blind Inline Hockey team in the 2024 FIRS World Championships, and the 2028 Olympics (in Los Angeles)! ​We hope that USA Roller Sports, together with our help, can see their way to make that happen!
​​