Mooses in Action
-images of Mooses on the rink 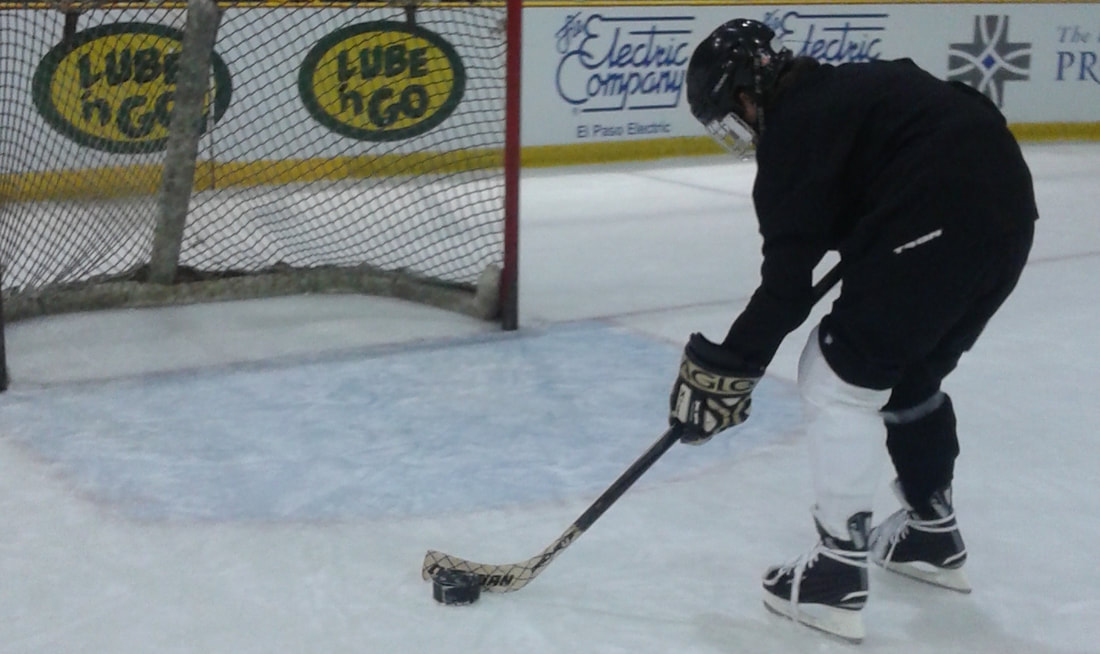 Mooses in Action!
Over the past two ice seasons, the Mooses have done a lot of work on both their play making and their skills acquisition. Each ice session, whether game play or practice, both technical and tactical abilities come into play. Here are a bunch of action images of our players performing all the skills of hockey. The Mooses head into the 2019-2020 ice hockey season very excited about continuing to develop their game!
If there ever were a player
to take the puck "in her wheelhouse," this is Mickayla's downtown train yard. She touches the puck low-slot, positioning it prior to blasting it on goal. 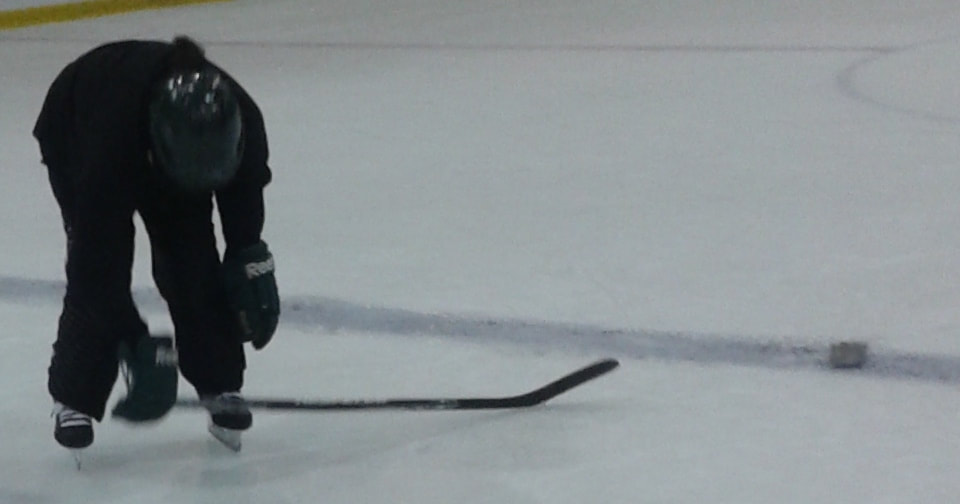 Carina receiving the puck at the blue line.
​Carina get's her stick down just in time, as the puck is zooming into the white zone, and she is about to run onto it onside to corral it in the white zone. 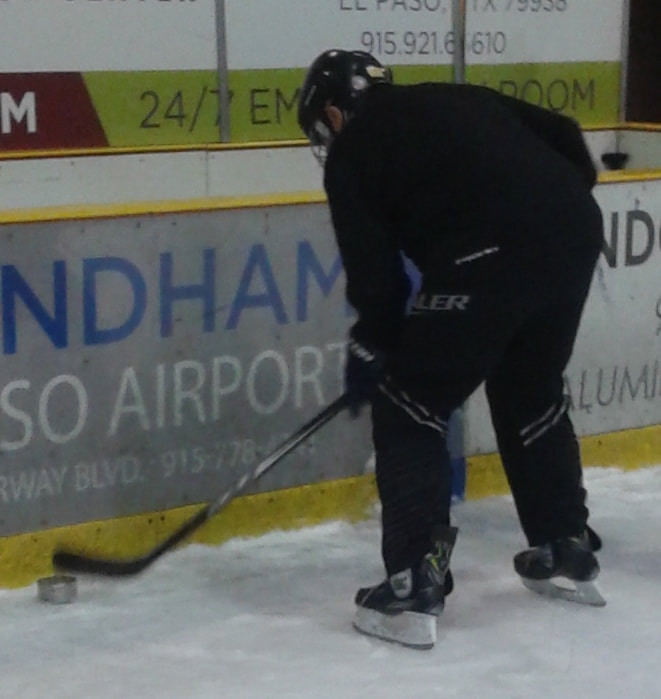 Coach Jesus takes the puck off the boards.
​This is Coach Zeus' "office," the right side point. He holds the puck in the zone, and is about to center it to the slot with one of his patented backhand passes. 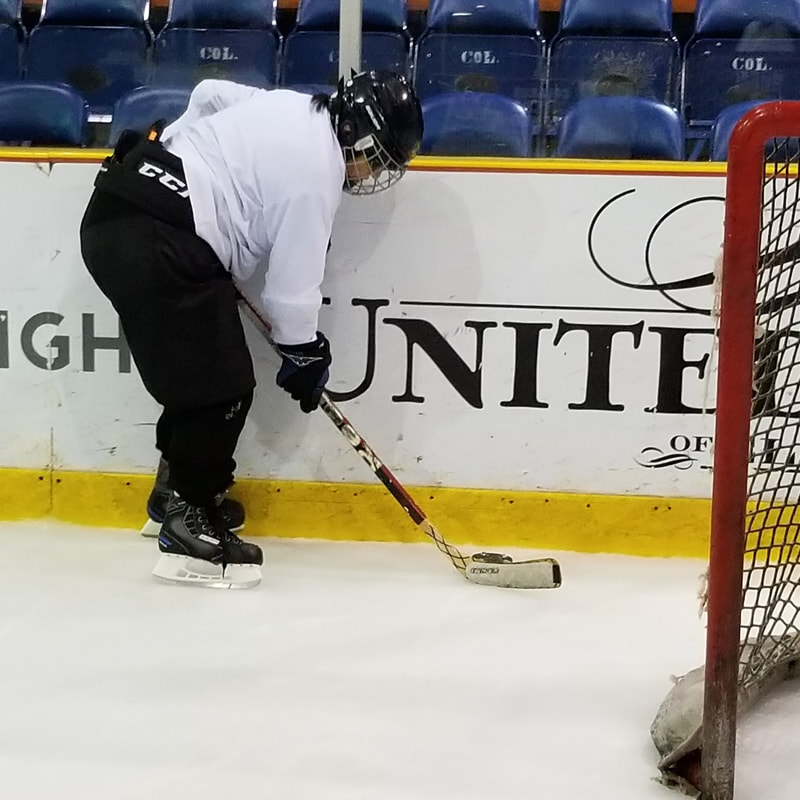 Daniela gets to the puck first,
​and takes posession behind the net. She is about to turn the puck and clear it successfully into the neutral zone. 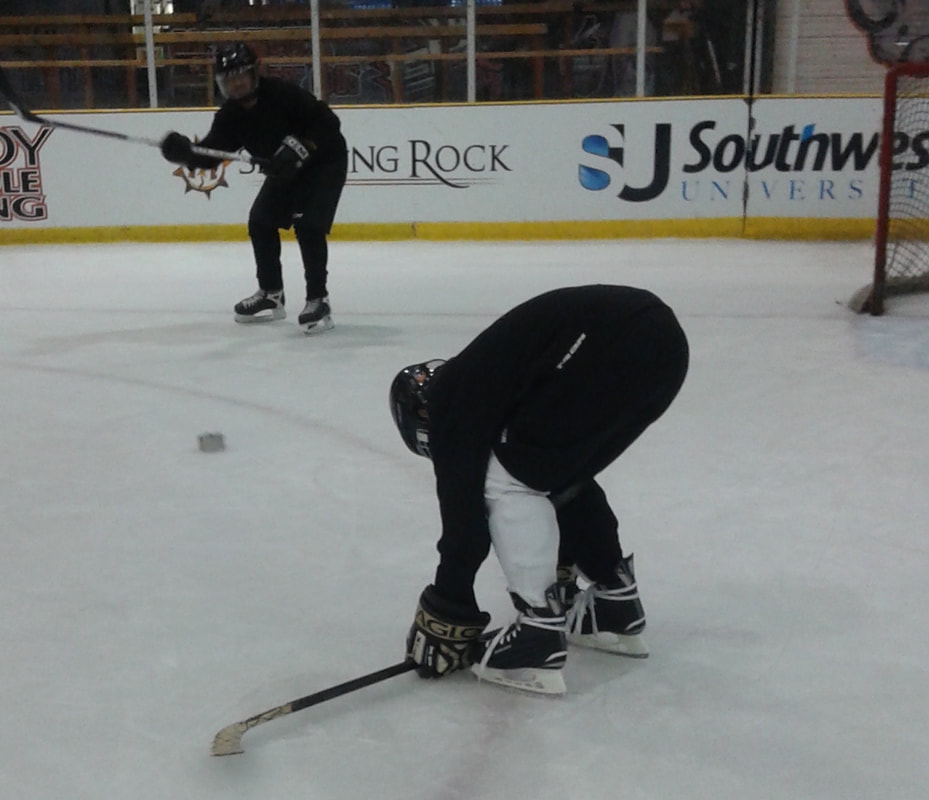 David to Mickayla.
​David centers the puck from below the left circle. Mickayla is in perfect position in the slot to receive the pass and play it on goal. 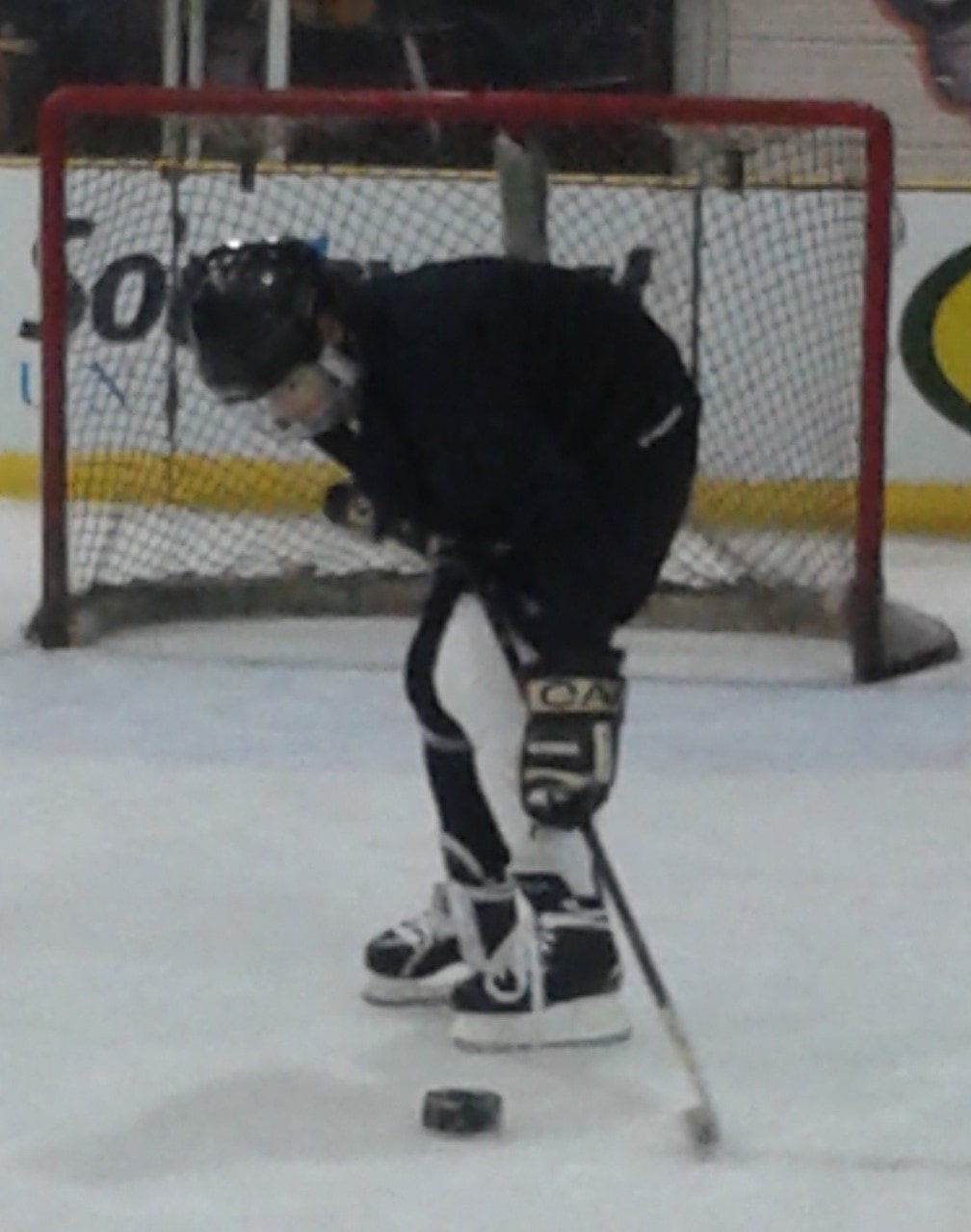 Acquiring the puck,
then what comes next? 90% of the time, the player must "turn the puck," to position both the puck and your body to make the play, either a pass or a shot on goal. Mickayla is the Mooses' best player at turning the puck and accurately gauging the direction on goal. Here she lines one up from the mid slot. 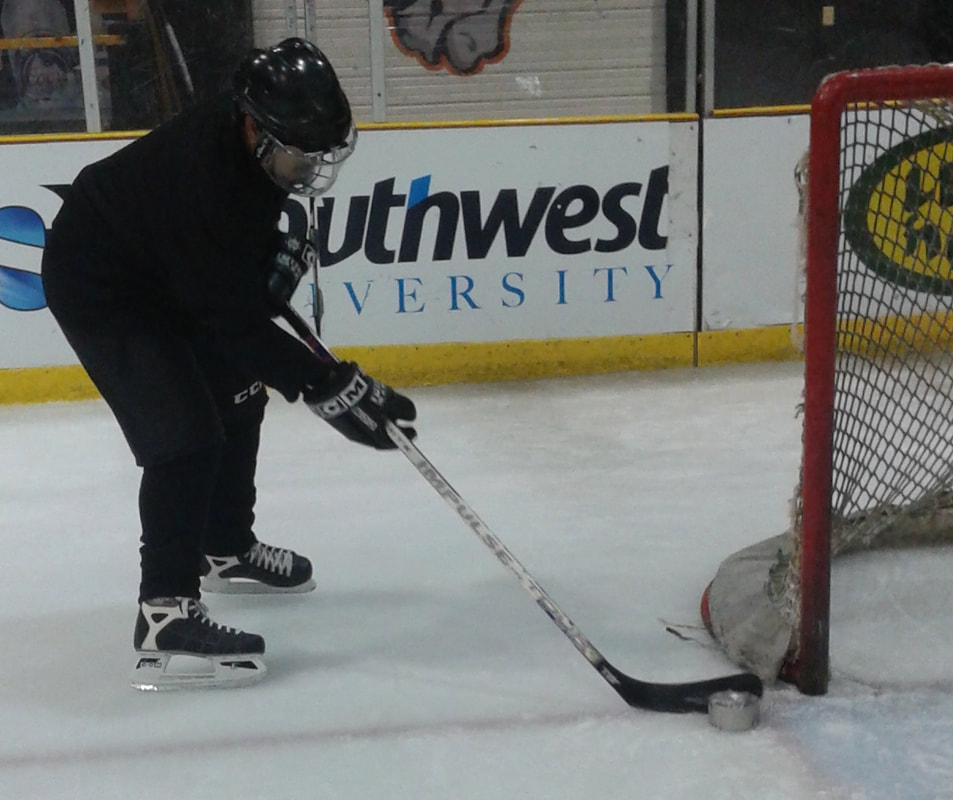 David is in perfect position
​at the side of the net. He is pulling back the puck to stuff it quickly inside the near post. 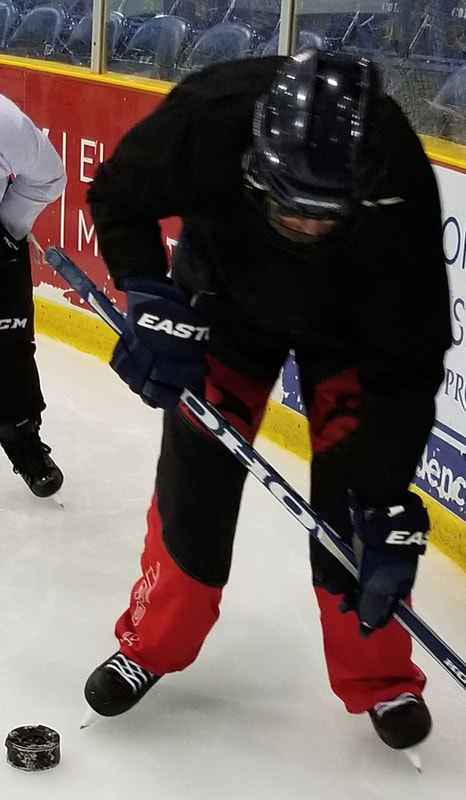 Craig working the left wing,
​or the three-wall, as the Mooses' tactical communication system refers to the lane. He is about to send the puck into the attack zone. 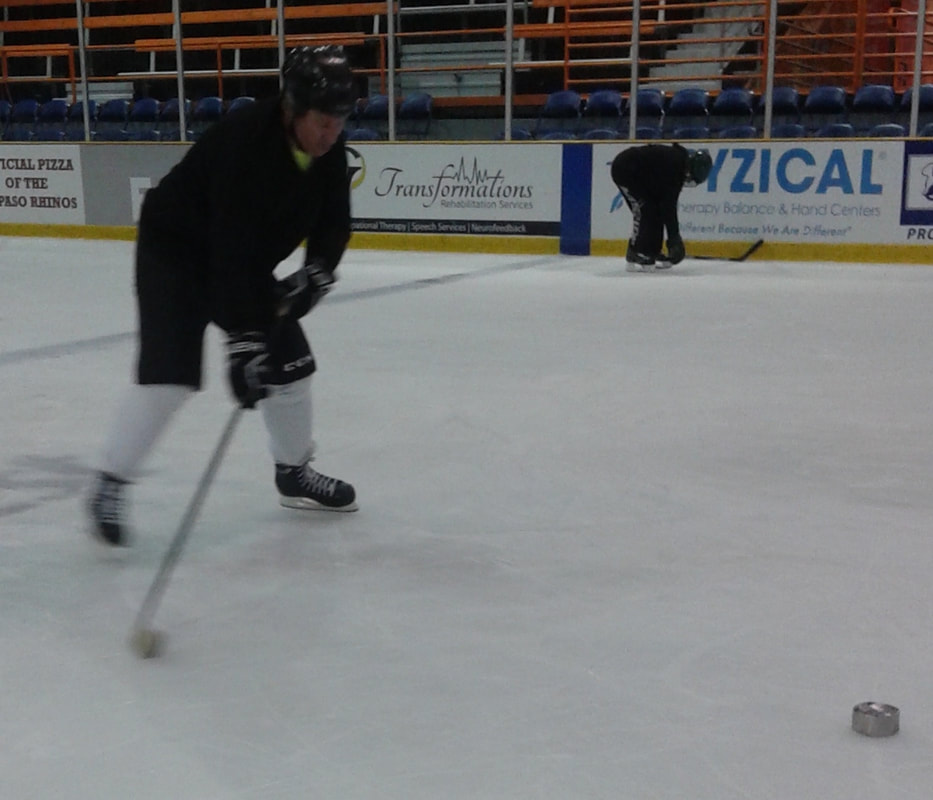 Mark intercepts a clearing pass
​from the defensive opponent. The camera catches him just about to get his stick down to receive the puck inside the blue line. Note that Carina is reacting to the defensive clearance as well, her stick at the receiving position, just in case the pass was coming her way. 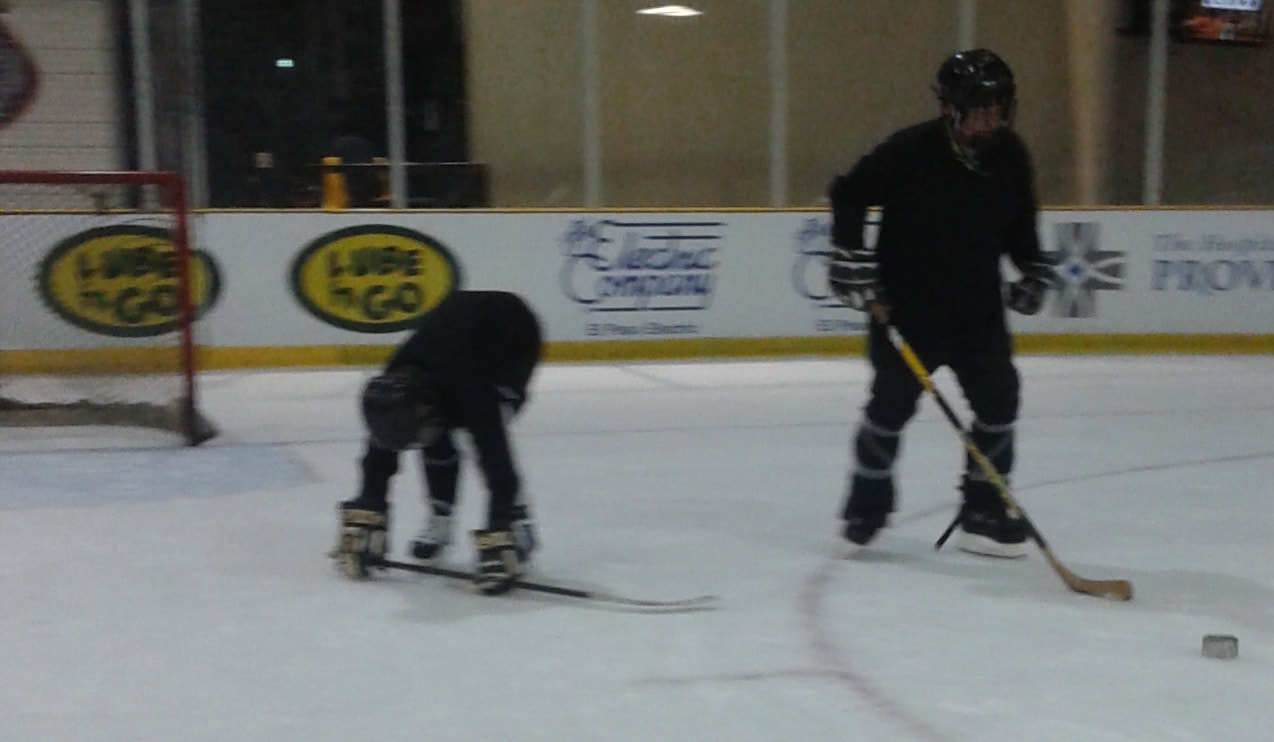 More teamwork.
​A centering pass has just bounced off of Mickayla's stick, and Danny is running onto to it to either re-center it, or shoot it himself. ​ 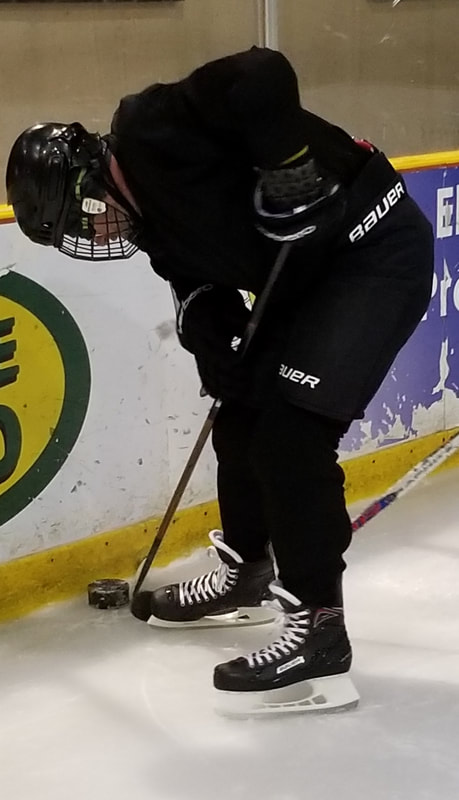 Sgt Mark does an excellent job of taking the puck off the end boards.
​He has reached the puck first. He is staying low. He is positioning his body between the puck and his opponent. He is about to center the puck into the slot. 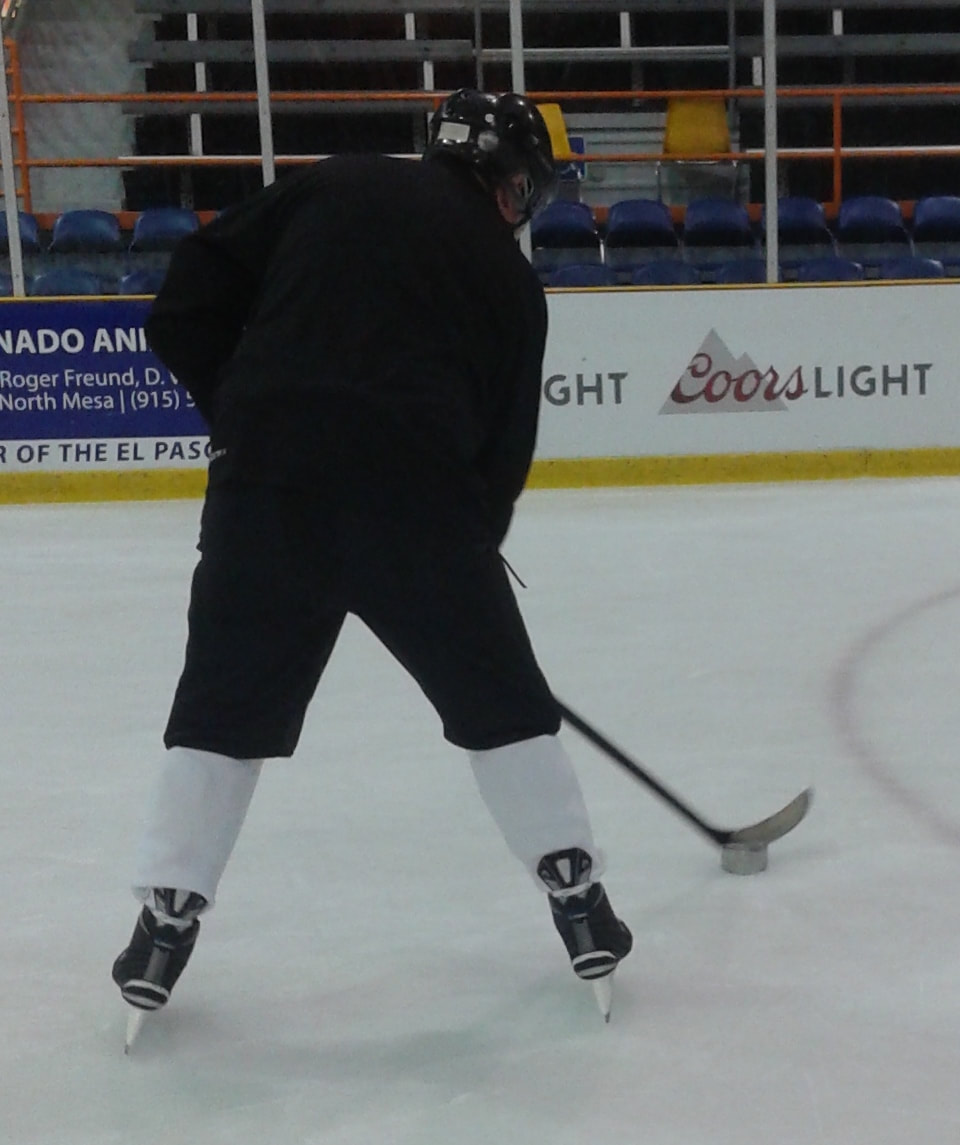 Mark practicing the maxim,
​"If it's on your backhand, backhand it." This works fairly well for Mark, as his backhand is almost as powerful as his forehand. Here he sends a very good centering pass into the slot. 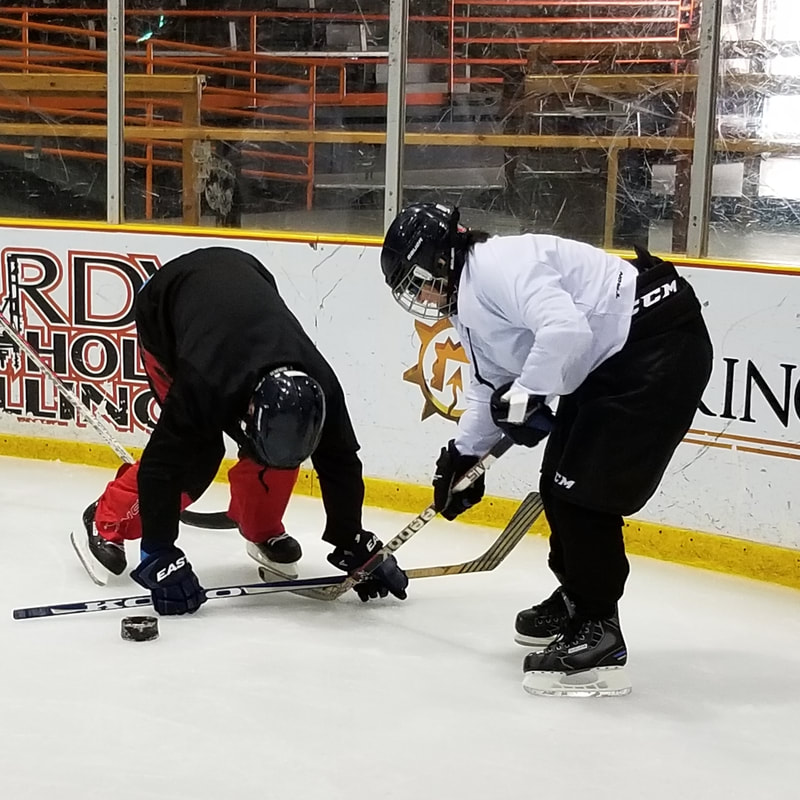 Craig and Daniela egage in a chess match.
​Both payers are intently figuring out what their opponent is trying to do, and each player is attempting to make a play for the puck at the same time 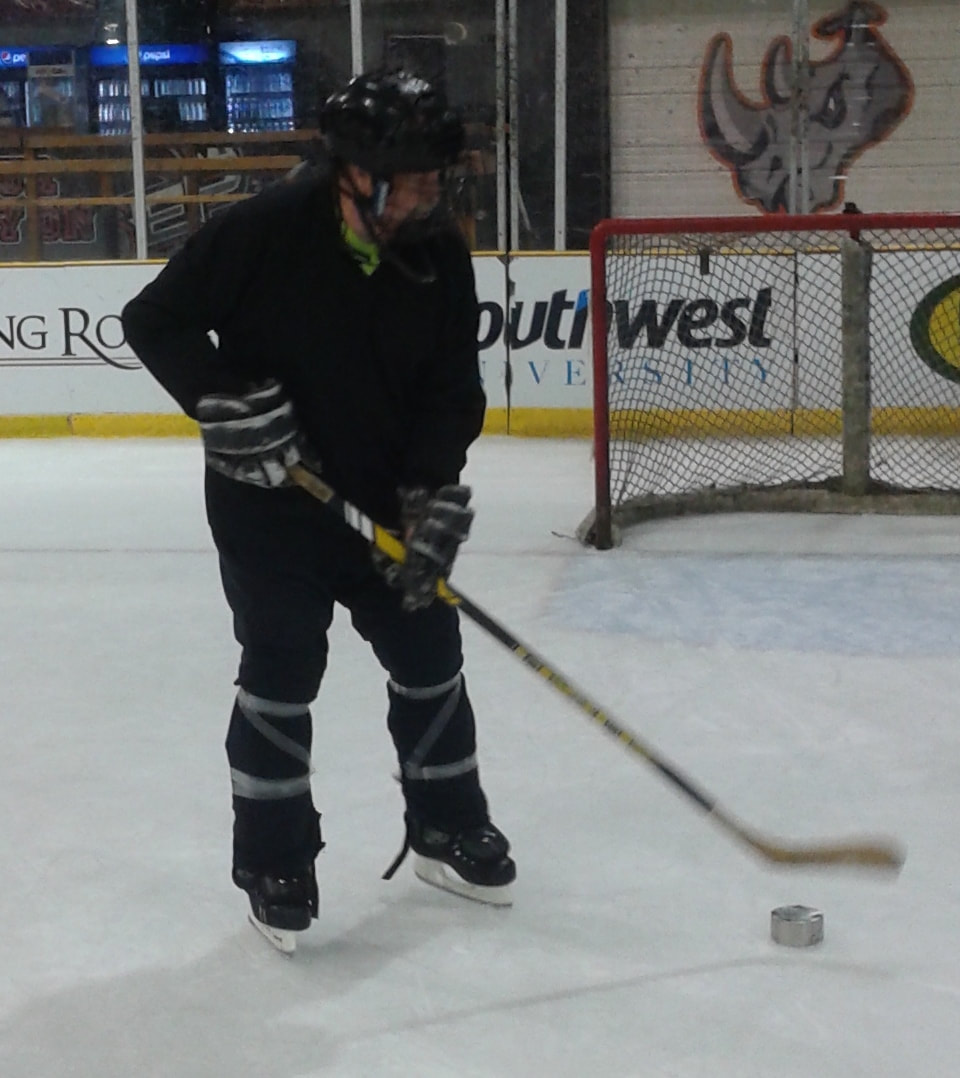 Danny, in a defensive posture,
​has just 1-2-touched the puck and is about to effect a clearance pass up to the neutral zone 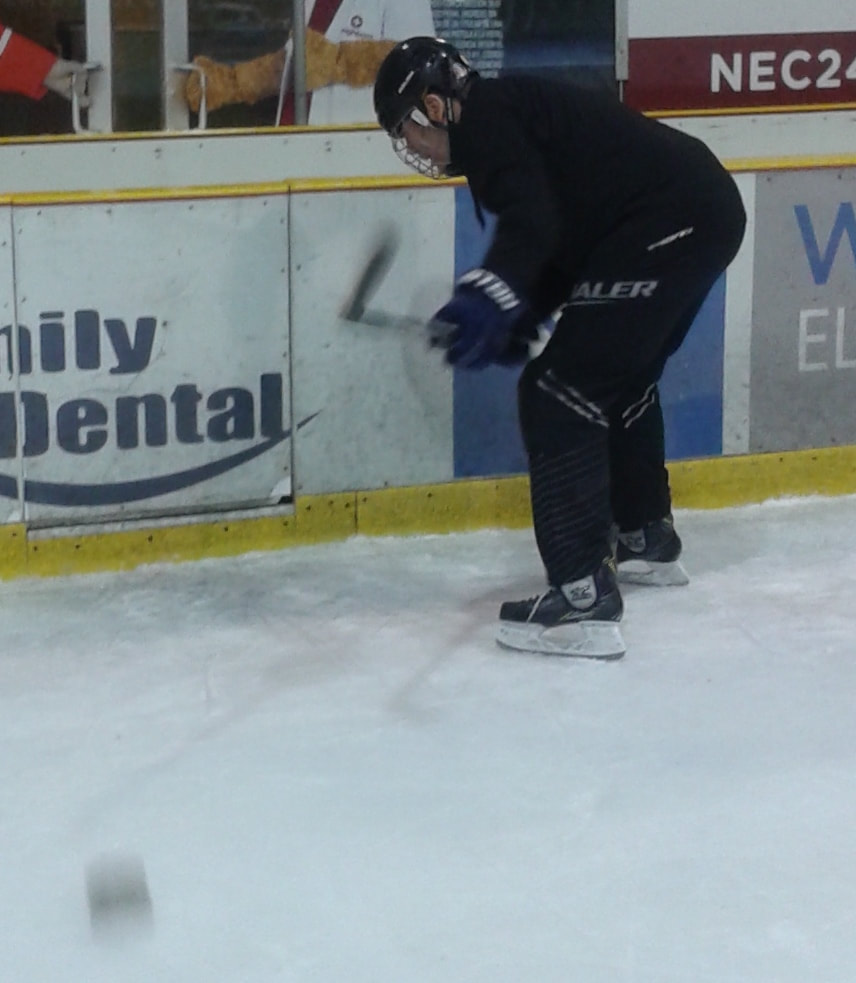 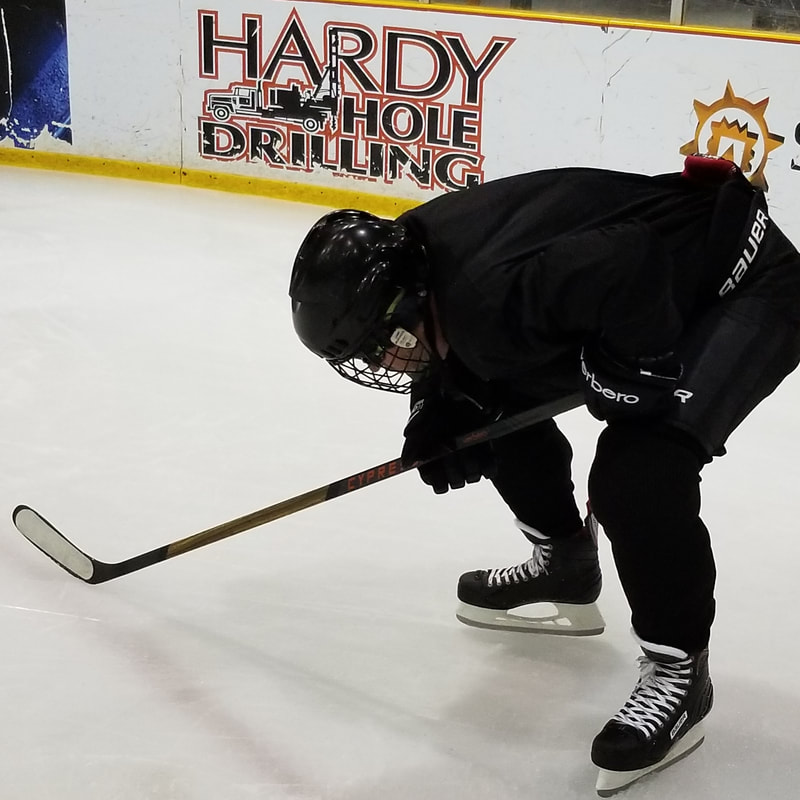 "Whoever's lowest, wins."
​Sgt Mark is very intently listening to a nearby play. He is ready to do whatever the next play calls for. 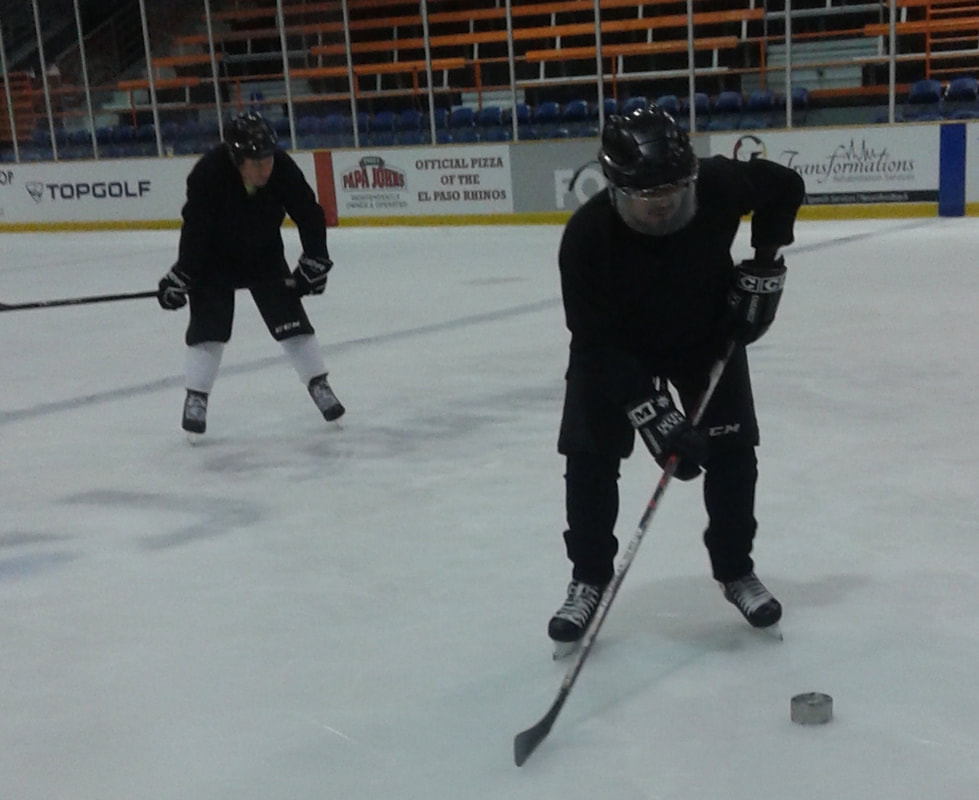 David squares up for the shot
​from the high slot. He has just intercepted a would-be clearance and is about to send the puck on net. Mark in the background is available at the point if needed. 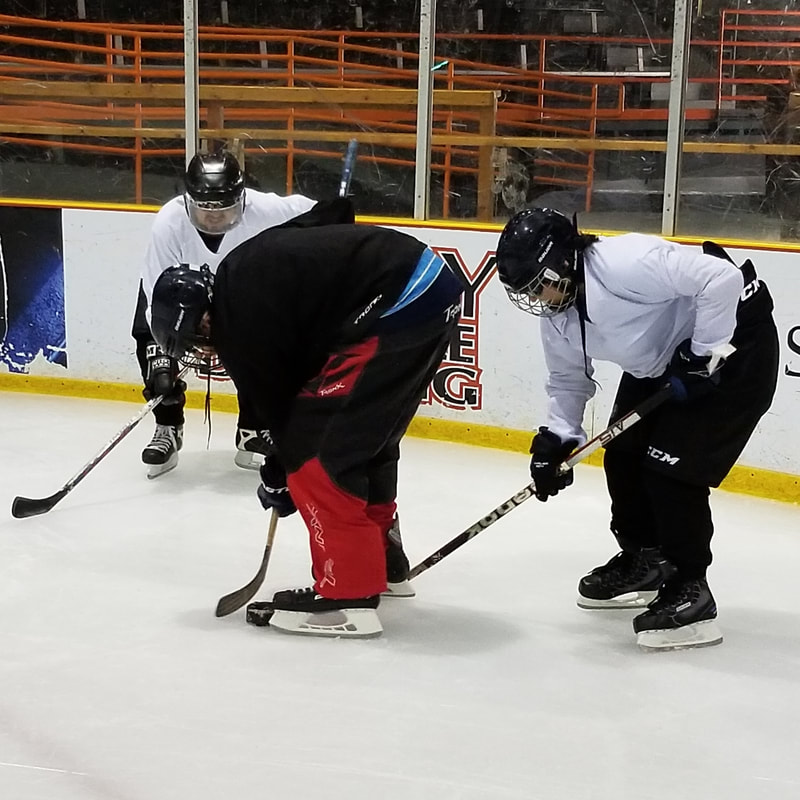 Craig managed the puck away
​from Daniela on this play. He centered the puck to a teammate for a shot on goal. David has wisely made himself available, but has not interfered with his teammate on the play.

Mark tees one up from the point.
​Mark has the strongest wrist shot on the Mooses. When he shoots on net from the blue line, all sorts of opportunities open up for himself and his offensive teammates. 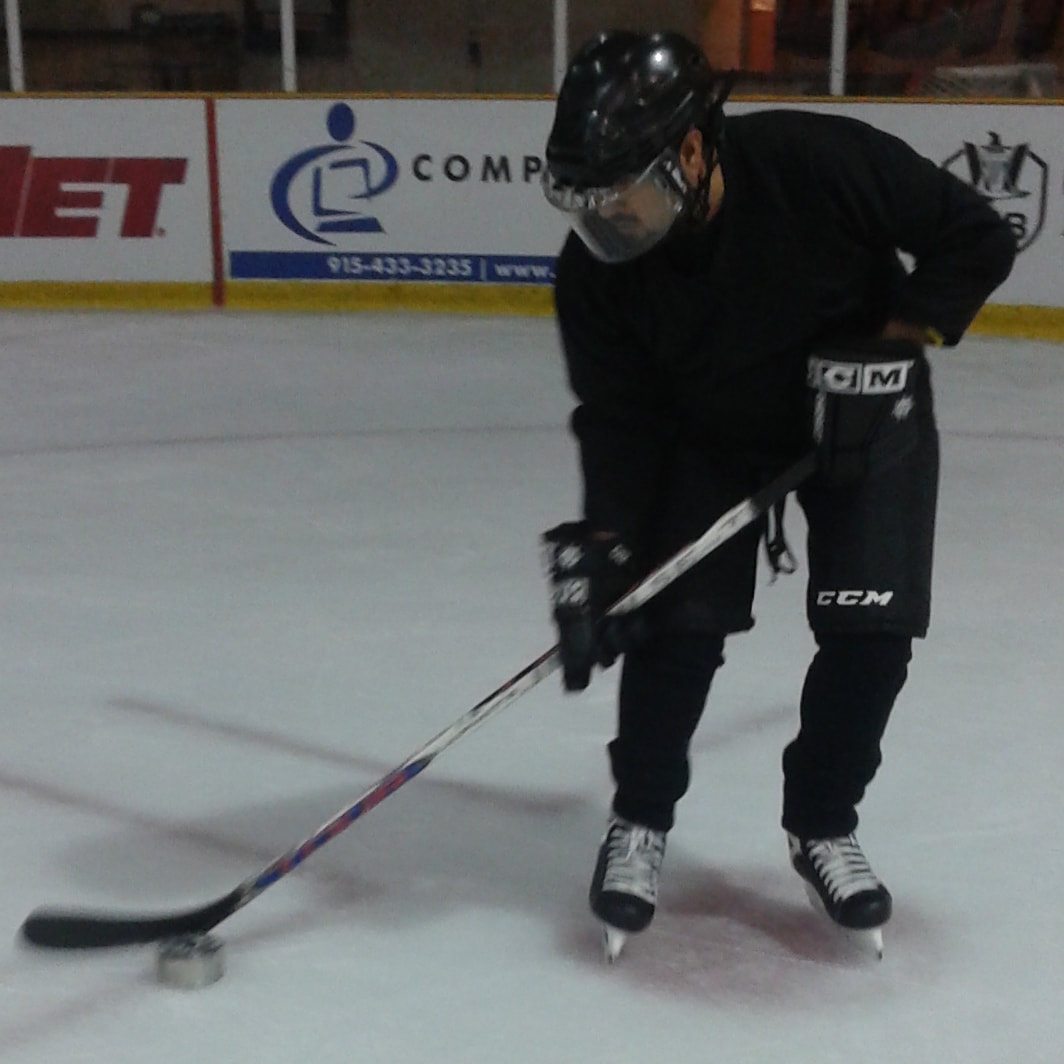 David shows perfect technique,
​setting up for the shot...or pass. He is touching the puck with his stick in a quick one-two, to make sure where it is. He can then let fly with confidence. 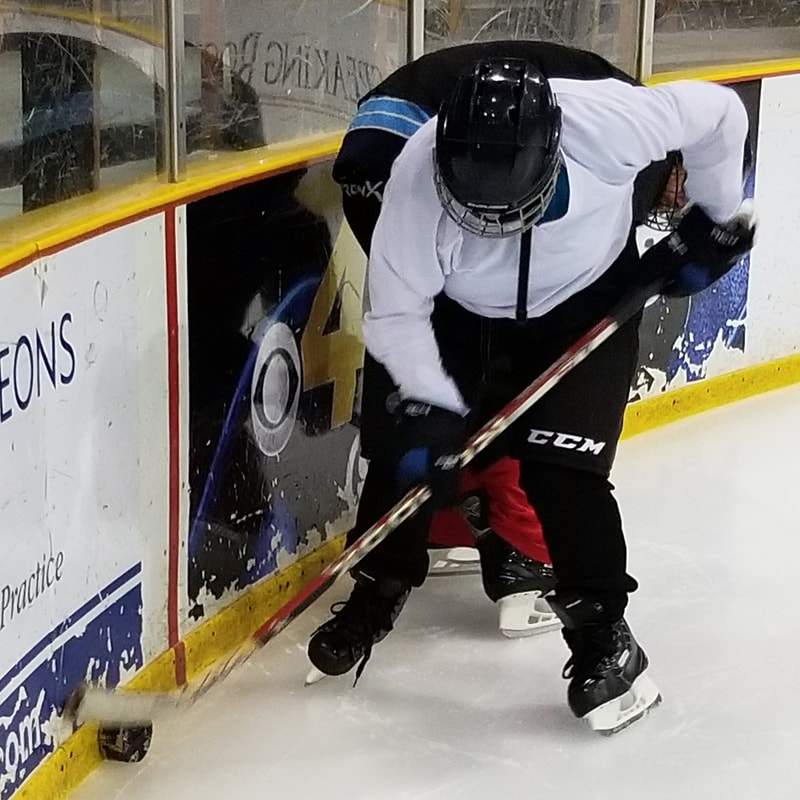 Daniela has pulled the puck away
​from Craig along the boards, and is shielding him off as she prepares to make the play. 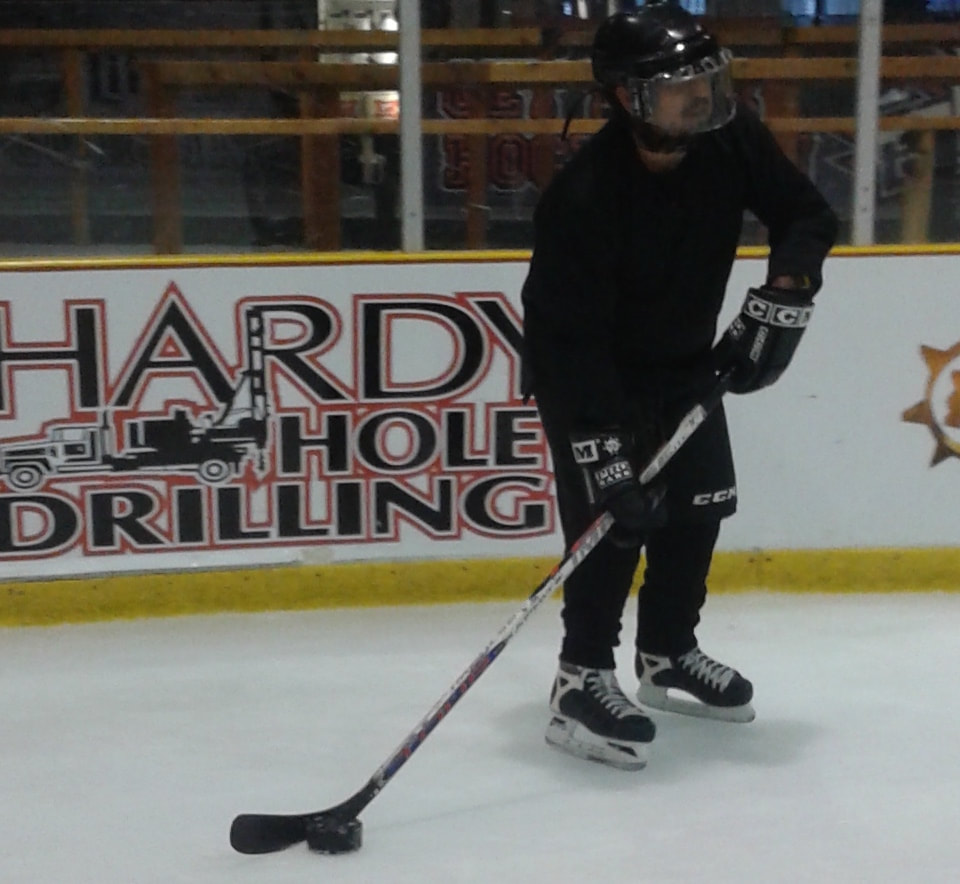 Second David technique demonstration.
​Dave has the puck confidently on his stick, and he is "looking up" to hear where his teammates are to effect a pass or a shot. If you face square to your target, you enable yourself to hear "bi-aurally," more so with both ears, and zero in on your objective more accurately. 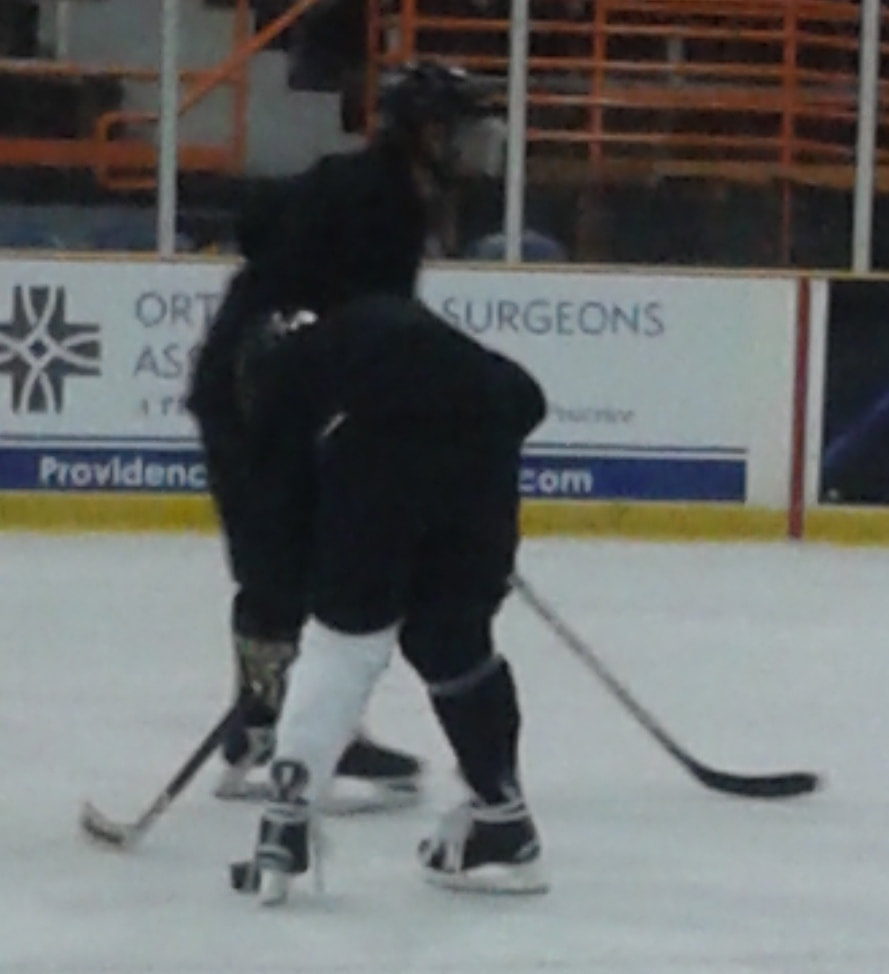 Great example of teamwork through communication.
​Both David and Mickayla were going for a loose puck in the slot. David has called, "You go!" to Mickayla, and has abandoned looking for the puck, to avoid getting in his teammate's way. He is now headed for the goal and a possible rebound, as Mickayla is acquiring the puck and readying her shot at the net.
Thinking out loud, for the 2019/2020 hockey season, let's designate two teams of Mooses that would be about even in skill/ability and could play a season of hockey games. The objective would be to encourage players to attend as much as possible, and we could work 2v2, 3v3 up to 5v5 game play into almost any session, inline or ice. We can keep statistics and records over the course of the entire year. Player trades are always possible, but these do seem to be fairly even teams:

Black Mooses:
1-Edgar Lopez
2-Mark Ray
22-Mickayla Biddle
13-Daniela Alvarado
Mark Tiemann
Craig Sanders
Notes to USA Hockey
Blind persons playing hockey with visually impaired and sighted persons, everybody playing with no use of vision, is better than all the blind players playing only among themselves. The belief that blind and/or visually impaired players need their exclusive game is inherently patronizing. This belief presupposes that blind persons cannot possibly play equally as well as sighted players. That belief is extremely patronizing. The task is not to design a game where the poor, unfortunate, vision-disabled players can go off and play by themselves. The task becomes to produce the game where all players can play equally well.

Establishment of a game exclusively for visually impaired simply grants the license to play the game to whoever can see the best. The entire game is inherently unequal. Visually impaired players who complain about the inequality of having to play with/against fully sighted players fail to realize that they have the same unfair advantage over low vision and especially total blind players.

To decry a game where sighted persons play with no use of their vision, along with players blind themselves, is to believe that the visually impaired players need protected against unfair treatment by those with higher visual ability. This belief is obviously patronizing, and only comes about when the form of the game does not provide all players the opportunity to play equally.

Blind players are better served by the game that places all players on equal footing. The difference between blind persons and others is that they have no vision to use. We cannot give blind persons the vision equal to other players. Eliminating all players' use of vision is the only way to make play fair and equal for everybody.